Year of Living Dangerously, The 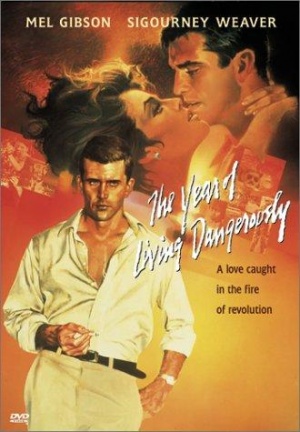 DVD Cover for The Year of Living Dangerously (1982).

The Year of Living Dangerously is a 1982 drama directed by Peter Weir that stars Mel Gibson as Guy Hamilton, an Australian journalist caught up in the tumultuous events surrounding the overthrow of Indonesia's President Sukarno in 1965. The film was shot in the Philippines and Australia and the cast included Sigourney Weaver and Linda Hunt, who portrayed the male character Billy Kwan, and would subsequently receive an Academy Award for her role in the film.

The following weapons were used in the film The Year of Living Dangerously:

An angry Indonesian soldier points a M1911A1 pistol at Guy Hamilton (Mel Gibson) and Pete Curtis (Michael Murphy) when they dance with local women at a bar.

The soldier draws his pistol.

Hamilton and Curtis decide that it is time to leave.

One of the Indonesian agents pursuing Billy Kwan (Linda Hunt) in the climax is armed with a Browning Hi-Power.

The agent cocks his Hi-Power before breaking down the door.

Another agent uses a Walther P38 when he kicks down the door to Kwan's hotel room.

An agent searches for the right room.

The agent enters Kwan's room with the P38.

Several Indonesian soldiers, most noticeably at the Jakarta airport and the road leading towards it, are armed with Sten Mk III submachine guns.

The soldier on the far left holds a Sten Mk III as Ali (Ali Nur) and Kumar (Bembol Roco) welcome Hamilton to Jakarta.

Soldiers point Sten guns at Hamilton as he makes his way towards the departure area at the end of the film.

A soldier holds a Sten Mk III prior to executing suspected members of the Indonesian Communist Party (PKI).

Austen, the Australian derivative of the Sten - 9x19mm

The soldier on the right holds an Austen as Ali (Ali Nur) and Kumar (Bembol Roco welcome Hamilton to Jakarta.

Loyalist Indonesian soldiers prepare to execute civilians suspected of being communists in the aftermath of the failed coup d'etat in October 1965. The two on the left are armed with Austens, while the two on the right hold Sten Mk.III.

A presidential guard holds a Thompson M1928A1 with a 30-round magazine.

A PKI militant sitting on a truck waves a Madsen M50 when it rams Hamilton's car during the protest. Later, an Indonesian soldier is also seen with a M50.

A PKI truck crashes into the rear of Hamilton's Chevrolet.

A militant waves the M50 as Hamilton and Kwan cover the protest.

A soldier holds a M50 as a wounded Hamilton is dragged back to his car.

M1 Carbines with 30-round magazines are carried by the guards escorting Hamilton through the presidential palace.

Presidential guards hold M1 carbines as they bring Hamilton to the media scrum.

Most of the Indonesian soldiers in the film are armed with the Norinco Type 56, with and without the folding "pig-sticker" bayonets. A PKI militant who helps treat Hamilton after he is beaten by soldiers also carries a Type 56. In reality, Indonesian soldiers in 1965 would have used Soviet-supplied AK-47s rather than the Type 56.

Soldiers stand guard near the U.S. Embassy as protesters attack it.

A military policeman with a Type 56 points to the roof of a hotel during the climax.

A PKI militant with a Type 56-1 collects some water.

An Indonesian officer (Agoes Widjaya Soedjarwo) at roadblock uses a genuine AK-47, distinguished by its open sights, to strike Hamilton when he refuses to stop walking towards the presidential palace after the attempted coup d'etat by the 30 September Movement.

Hamilton speaks to the officer while attempting to move towards the palace.

The officer orders Hamilton to halt. The open sights can be clearly seen in this shot.

A soldier holds the AK-47 as the officer drags Hamilton back to his car.

Indonesian soldiers fire M16A1 rifles at Hamilton and Jill when they drive through their checkpoint in defiance of a curfew. The use of the M16A1 is an anachronism since the Indonesian military only adopted the rifle in the 1970s, well after the period in which the film is set.

A soldier fires his M16. Also worth noting is the difference between the muzzle flashes from the soldier's M16 and the Kalashnikov being fired next to him.

The Marines stand guard at the embassy's gates.

The Marines attempt to remain calm as the PKI protesters bang on the gates.

A single soldier carries a Lee-Enfield No. 4 Mk I rifle when Hamilton returns to the airport in the film's conclusion.

A soldier in the background has a Lee-Enfield slung on his back as Kumar tells Hamilton to leave Indonesia.

Soldiers wave their BARs as Hamilton and Ali drive towards the presidential palace.

A soldier holds a BAR as Hamilton is knocked down.

Browning M1919 machine guns are mounted atop the M41 tanks surrounding the presidential palace. This is inaccurate; the M41 was never used by Indonesia.

A variant of the Browning M1919 developed during World War 2, this model is designated the M37, with the ability to feed from either the left or the right of the weapon - 30-06. This example is shown without a tripod, only the pintle mount. This the MOST likely .30 cal machine gun to be seen firing from armored vehicles.

A soldier wields a M1919 machine gun mounted on the tank.

A soldier is seen with a M60 machine gun in the conclusion of the film.

A soldier with a M60 watches as Hamilton enters the airport.
Retrieved from "https://www.imfdb.org/index.php?title=Year_of_Living_Dangerously,_The&oldid=1316000"
Categories: