The Browning M1919 and variants can be seen in the following films, television series, video games, and anime used by the following actors: 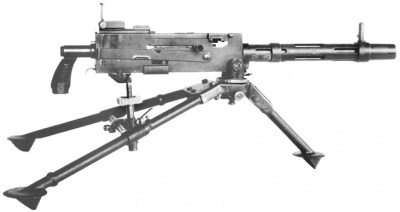 The M1919A2 is a lightweight machine gun intended for cavalry units. It has an 18" barrel with slotted shroud and a special tripod, though the M1917 or M2 tripods could also be used. The A2 was introduced in 1922 and was in service only for a short while.

Developed in the mid-1930s the M1919A4, was by far the most common variant and the first model of the M1919 designed for general use and featured the now standard 24" barrel (earlier variants were designed as tank and cavalry machine guns and had a shorter 18" barrel). Original M1919A4s featured a different heat shield with horizontal slots similar to those found on earlier models as opposed to the circular perforations found on the vast majority of M1919s. Early M1919A4s also featured a rotating notched bar on the right side of the receiver which was used to hold the bolt in the open position to prevent ammunition cook-offs in a hot barrel, a feature required by the Army at the time. This requirement, and hence the bolt latch, was dropped in 1943 (meaning that any M1919A4 lacking this latch in media set prior to 1943 is technically incorrect) although the bolt latch remained present on some weapons until the 50s.

When the M3A1 Stuart tank was being designed in the early 1940s, it was found that a standard M1919 could not be fitted due to there not being enough clearance in the turret to allow the bolt to be operated. Therefore, the weapons were modified with a downward curving bar affixed to the right side of the receiver to allow the bolt to be retracted from the rear of the weapon. These weapons were later given the M1919A5 classification to simplify the supply of replacement parts, and could be found with either horizontal or vertical buffer tubes depending on whether the gun was built from a flexible or fixed M1919A4. After the requirement for the M37 (a variant fitted to armored vehicles that could be converted to feed from either side) was put forward in 1950, it was decided that a variant similar to the M1919A5 would be uses in the interim. The M1919A4E1 was converted from existing stock piles of M1919A4s and was very similar to the M1919A5 except it had a straight bolt retracting bar (the downward curving bar of the M1919A5 was only necessary in the interior of the now obsolete Stuart tanks).

The M1919A6, introduced in late 1943, was an attempt to create a light machine gun capable of being carried and operated by one man, comparable to German machine guns like the MG42. The M1919A6 featured a shoulder stock, bipod, carry handle, conical muzzle booster (on later models) and a lighter, changable barrel. The barrel weight on the M1919A4 was already marginal in terms of heat dissipation, and lightening the barrel in the M1919A6 made for a weapon that was prone to overheating and was large, heavy and awkward compared to the majority of contemporary machine guns. The original M1919A6 lacked a muzzle booster due to the need to have an exposed hex on the muzzle to allow the barrel to be changed. This led to problems cycling the action so a removable muzzle booster was added to increase the chamber pressure. At the end of WWII, a conical flash hider was introduced as part of the muzzle booster, but contrary to the majority of depictions in media, this was never actually issued before the end of the war (although it was extensively used in Korea).

The .30 AN/M2 (not to be confused with the .50 AN/M2 or 20mm AN/M2) was an aircraft variant of the M1919A4 which had a lighter receiver and thinner barrel (being overall about 1/3 lighter than the ground version), higher rate of fire and the ability to be fed from either side of the gun. The flexible mount variant of the AN/M2 is also the only production variant of the M1919 that was fitted with spade grips.

The British adopted a variant (based on Colt's commercial version, the MG 40) chambered in .303 British and redesigned to fire from an open bolt, as the cordite in .303 was far more susceptible to cook off. The British model was simply named Browning .303, quickly progressing through the Mk I, Mk I*, Mk I**, Mk II, and finally the Mk II*. The Browning .303 Mk II* ("mark two star") was the definitive model and standard for most British aircraft during WWII. Compared to the .30 AN/M2, the Browning .303 Mk II* can be easily identified by the barrel jacket featuring long oval slots instead of circular holes, as well as the large fluted muzzle booster (the booster is what defines the Mk II* compared to the Mk II). Guns mounted in bomber turrets also featured a finned conical flash suppressor on the end of the muzzle booster. 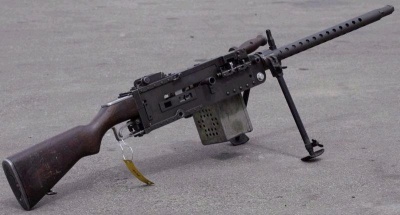 Stinger machine gun replica built by Guiette Mfg., Inc. - .30-06 Springfield. This operational replica was created for the film Flags of Our Fathers, but did not show up in the final cut. 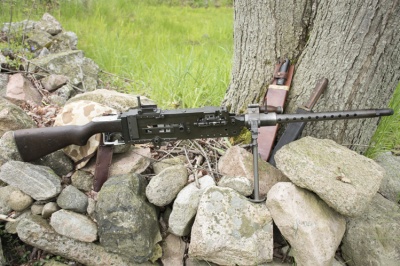 During WWII, Para Marine Sergeant Mel J Grevich and Private First Class John Lyttle of the Fifth Marine Division produced a handheld AN/M2 variant fitted with a simple trigger hooked up to the firing solenoid, a 100-round belt box, a BAR bipod and an M1 Garand stock. This weapon, referred to as the "Stinger," was used in the invasion of Iwo Jima, with one of the six Stinger gunners present during the operation, Corporal Tony Stein, receiving the Congressional Medal of Honor. Only six were made and none survived the war, but the story of this cobbled-together weapon is still used to remind US Marine recruits that their most powerful weapon is their mind.