From Internet Movie Firearms Database - Guns in Movies, TV and Video Games
(Redirected from The Iron Giant)
Jump to navigation Jump to search 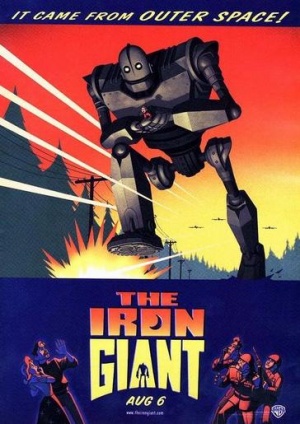 The Iron Giant is a 1999 animated science fiction film directed by Brad Bird with the voice talents of Eli Marienthal, Vin Diesel, Jennifer Aniston, Harry Connick Jr., Christopher McDonald and John Mahoney. Adapted from the novel The Iron Man by English writer Ted Hughes, the film was a disappointment at the box office despite favorable reviews. However, the film has gone on to become a cult hit and opened doors for director Bird, who went on to direct such animated features as The Incredibles and Ratatouille as well as the 2011 live-action film Mission: Impossible - Ghost Protocol.

The following weapons were used in the animated film The Iron Giant:

General Rogard carries an M1911A1 and it's mostly seen in his holster as well as when he uses it to shoot at the Iron Giant. FUN TRIVIA FACT: In this scene, and in the other scenes where General Rogard fires his M1911A1 at the Giant, the pistol sound effects are the EXACT same sound effects used in Terminator 2: Judgment Day for the Beretta and Browning pistols in that film.

Rogard fires at the Iron Giant during their first confrontation.

Gen. Rogard fires his M1911A1 at the Iron Giant as Kent Mansley tries to save his hearing from the shots fired practically next to his ears

Rogard reloads his M1911A1 when his jeep runs away from the Iron Giant.

An M1 Garand is seen used by a soldier when Rogard's jeep stops after the Iron Giant approaches town from the forest while destroying tanks. All M1's in the film appear to be fitted with M7 rifle grenade launchers. 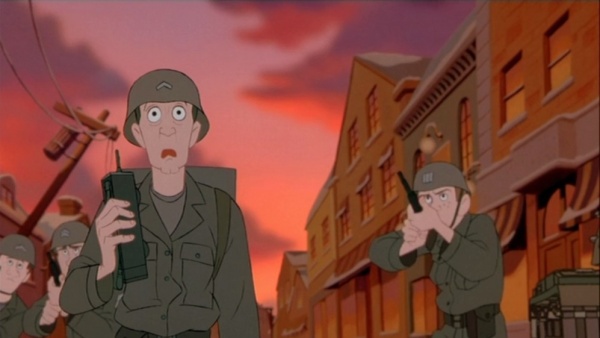 A rifleman fires his M1 Garand at the robot. 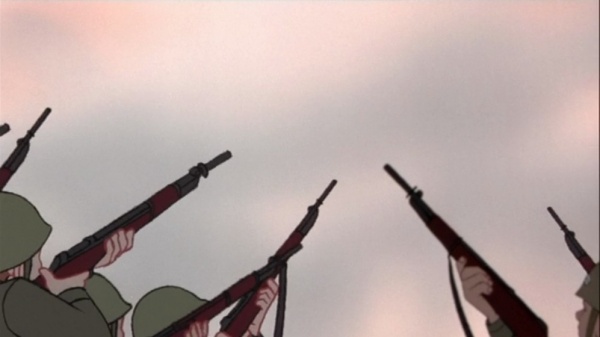 U.S. Army soldiers aim their M1s at the approaching Giant 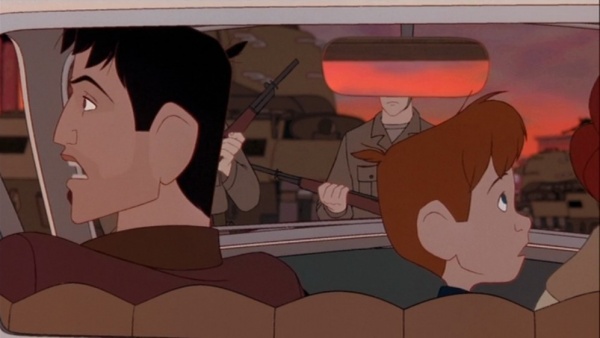 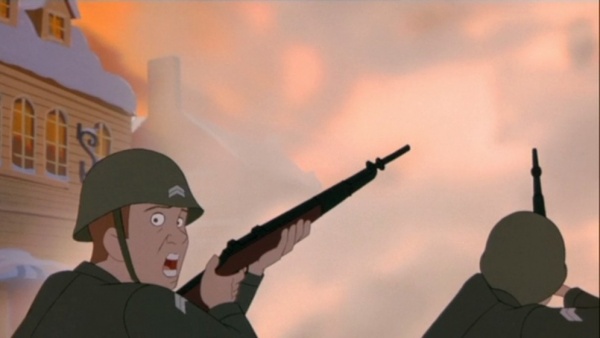 A Corporal requests orders while holding his M1 Garand 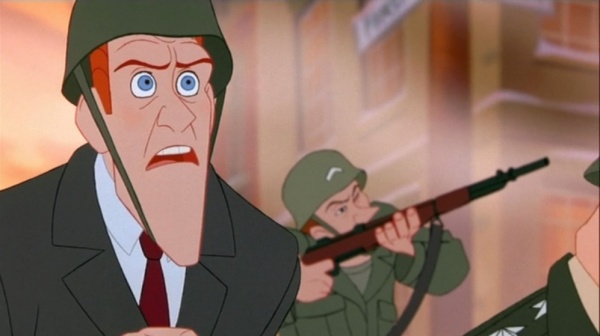 A U.S. soldier was armed with a M1 Carbine during the first attack on the Iron Giant.

On the right, a U.S. soldier draws down on the Iron Giant with his M1 Carbine.

Winchester Model 70 rifles were used by the two hunters when they killed a deer before Hogarth and the Iron Giant found them. The hunters drop their rifles and flee at the sight of the Iron Giant. 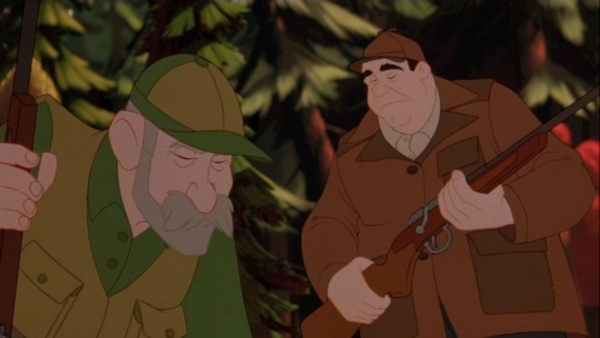 The two hunters stand over their kill. 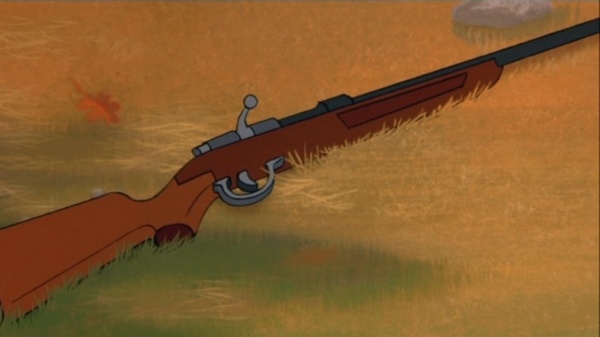 One of the dropped rifles, here with its bolt partially opened.

A BB Gun was used by Hogarth Hughes in the beginning of the film while searching for the Iron Giant at the power station. It seems to be a lever-action weapon, possibly a Daisy Red Ryder. Hogarth originally tapes a flashlight to the barrel, but the flashlight disappears when the Iron Giant crushes the weapon underfoot while following Hogarth. 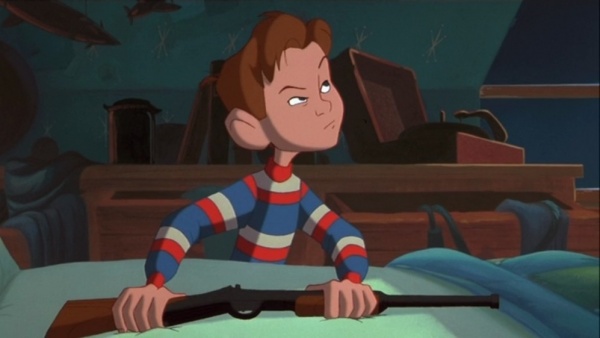 Hogarth breaks out his BB gun when preparing to head out. The lever has vanished in this frame. 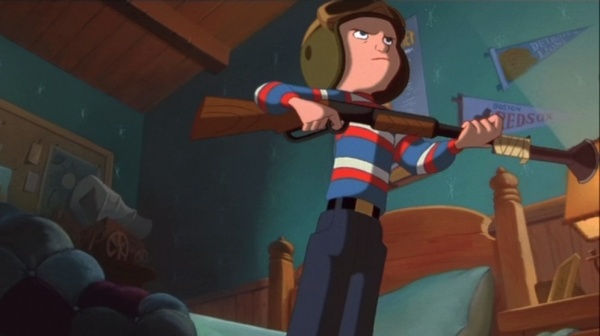 Hogarth strikes a heroic pose with his BB gun. Note how the flashlight obstructs the muzzle of the gun and would send any fired BB's flying wildly off-target 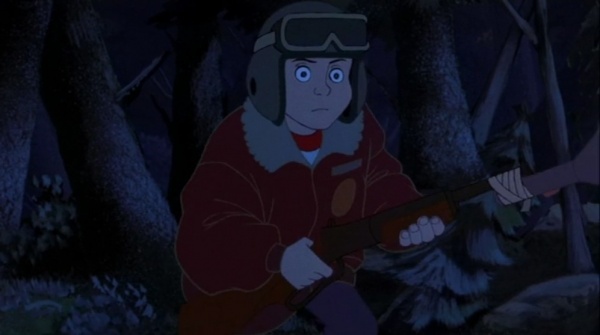 Hogarth searches the woods armed with his BB gun

Near the end of the film, U.S. Army vehicles (primarily M41 Walker Bulldog tanks) can be seen fitted with Browning M2HB heavy machine guns when attacking the Iron Giant (voiced by Vin Diesel), mistakenly believing he was attacking the town of Rockwell.

An M41 tank engages the Iron Giant, the M2HB visible at the Commander's hatch

A Browning M2HB is mounted on an M41 tank before it is destroyed.

In addition to the Army, the U.S. Air Force also becomes involved in the attack against the Iron Giant, sending F-86 Sabre fighter jets to try to destroy him, using missiles and built-in Browning M3 heavy machine guns to eventually shoot him down, but not destroy him.

Army jeeps are fitted with a Browning M1919 machine guns.

A variant of the Browning M1919 developed during World War 2, this model is designated the M37, with the ability to feed from either the left or the right of the weapon - 30-06. This example is shown without a tripod, only the pintle mount.

An M1919-equipped Jeep prepares to engage the Iron Giant

A soldier engages the Iron Giant with the M1919, the driver getting sprayed with spent casings

Behind Rogard, a Browning M1919 is seen mounted on the jeep.

The first weapon fired at the Iron Giant by the Army, several soldiers can be seen armed with M20 "Super Bazooka" rocket launchers.

The soldier in the middle is armed with an M20 "Super Bazooka".
Retrieved from "https://www.imfdb.org/index.php?title=Iron_Giant,_The&oldid=1480924"
Categories: