X-Men Origins: Wolverine is the fourth film in the X-Men film franchise and the first solo film for the character of Wolverine (Hugh Jackman). This film was directed by Gavin Hood and retells the story of how Logan became the fierce Wolverine and what happened to his relationship with his brother and fellow mutant Victor (Liev Schreiber), who also possesses the power of immortality. The film's cast includes Ryan Reynolds, Taylor Kitsch, Dominic Monaghan, Kevin Durand, Daniel Henney, and Danny Huston and the film would also inspire a 2009 video game. In addition to the X-Men sequels, Jackman would return as Logan in two more standalone Wolverine films: 2013's The Wolverine and 2017's Logan. Ryan Reynolds would return as a somewhat different version of Deadpool in his own feature film in 2016.

The following weapons were used in the film X-Men Origins: Wolverine:

Agent Zero (Daniel Henney) uses a Beretta 92FS Inox fitted with a sound suppressor to shoot a cheap cigar in half while it is in Logan's (Hugh Jackman) mouth when he confronts him in Canada. Since the film takes place around the time of the Three Mile Island nuclear accident (1979), this handgun is anachronistic. The 92 itself is not anachronistic, having entered service in 1975, but the 92FS Inox wasn't developed until 1990. It could possibly be nickel-plated. 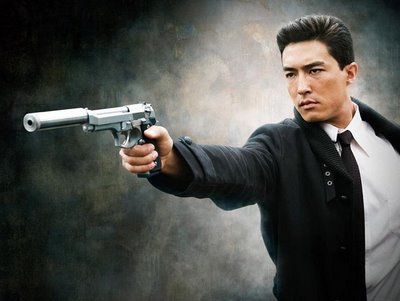 Agent Zero with a sound-suppressed Beretta 92FS Inox in a promotional image.

Agent Zero shots Wolverine's cigar in half with a quick shot from his suppressed Beretta 92FS Inox.

Victor Creed (Liev Schreiber) is seen with an M1911A1 in his holster while serving in Vietnam and many Vietnam War soldiers also have some holstered. Col. William Stryker (Danny Huston) intimidatingly flashes one in his holster when he has Kayla Silverfox (Lynn Collins) explain his plot to Wolverine (Hugh Jackman). Another soldier trying to make Victor stand down in the Vietnam War scene had an M1911A1 in hand.

Victor Creed's M1911 holster can be seen while he takes down soldiers in Vietnam.

Victor takes down a soldier with an M1911A1 in his left hand.

Col. Stryker (Danny Huston) uses a 7.5" barreled stainless Ruger Redhawk with anachronistic Goncalo Alves target grips, (not the newer Super Redhawk, as indicated by the ejector shroud) loaded with adamantium bullets to shoot Wolverine (Hugh Jackman) five times, two of which are fired into his skull, erasing his memory. One would think that Stryker would give this weapon to Agent Zero, since his super powers make him extremely efficient with firearms.

David North, aka "Agent Zero" (Daniel Henney), carries a pair of stainless Taurus PT92s in the film notably during the Nigerian mission. He shows off his reloading talents by throwing them in the air and inserting fresh mags as they fall, but the CGI had in one instance the slides are locked back, but by the time Zero inserts new mags, the slides were released and he continues to fire without racking the slide or pressing a release, as if he already had one in each chamber. These events appear to take place in 1979, making these handguns anachronistic. The Taurus PT92 wasn't released until 1983. 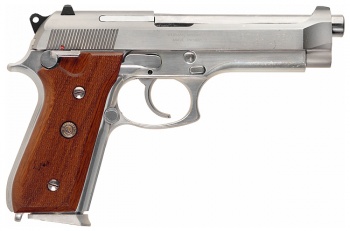 Zero pretending to surrender, but in reality, has 2 more PT92s strapped to his back.

Zero shows off his unusual way of reloading his Taurus handguns.

During the opening credits, James Howlett (Hugh Jackman) is seen using an M1A1 Thompson while fighting in Normandy during WWII.

The barrel of an M1A1 Thompson is seen to the right on the Higgins boat. Howlett is carrying one as well.

Howlett and several other Union soldiers charge with Enfield Pattern 1853.

Howlett gets shot while armed with an Enfield Pattern 1853 while seen fighting in the American Civil War.

Howlett and Victor run together with Enfield Pattern 1853.

A German soldier during WWI shoots Victor Creed (Liev Schreiber) with a Mauser Gewehr 1898 rifle. James Howlett (Hugh Jackman) briefly grabs one and tosses it in the air for Victor to use as a melee weapon while fighting "back-to-back" in the trenches.

Both James Howlett (Hugh Jackman) and Victor Creed (Liev Schreiber) are armed with the M1903 Springfield while fighting in the trenches during World War I.

Howlett takes out two German riflemen with his M1903 Springfield.

As Victor charges the machine gun bunker, the Karabiner 98k is seen used by one of the German soldiers.

A German soldier in the background with the Kar98k before being disarmed by Howlett.

As James Howlett (Hugh Jackman) and Victor Creed (Liev Schreiber) storm the beaches in WWII, some of the soldiers that accompany them are armed with M1 Garands.

Soldiers running through heavy fire with M1 Garands in their hands.

Some of the men serving with Howlett are seen using M1 Carbines during WWII.

The soldier to the left is armed with an M1 Carbine.

A few soldiers during the Normandy invasion with M1 Carbines.

James Howlett (Hugh Jackman) is seen armed with a Colt Model 733 while serving in Vietnam in 1974. This gun was not available at the time and is anachronistic (the Colt XM177 would have been more accurate).

In a scene from the trailer, Howlett in Vietnam with an anachronistic Colt Model 733. Note the Brass Deflector on the Receiver, which is not featured in any XM177 variants.

In a scene from the trailer, Howlett with his Colt M733.

Howlett with the Colt M733 as he fights the U.S. soldiers attacking Victor.

During the raid on the compound, Chris Bradley (Dominic Monaghan) carries what appears to be a Colt Model 653 carbine.

During the raid on the compound, Chris Bradley (Dominic Monaghan) on the right carries what appears to be a Colt Model 653 Carbine.

US soldiers during Vietnam hold up Victor Creed (Liev Schreiber) with M16A1s after he kills his commanding officer. When he and Howlett (Hugh Jackman) are tied up to posts and shot by a firing squad, they too are using M16A1s. During both of these sequences, the M16A1's are fitted with 30-round magazines.

A U.S. soldier executes Howlett and Creed with his M16A1, but both of them survived the volley fire.

Howlett takes out a soldier armed with the M16A1 with the 30 round magazine.

During the opening credits, one of the US soldiers in Vietnam is seen aiming an M14 Rifle at Howlett and Creed.

A soldier behind Howlett pointing his M14 at both Howlett and Creed. Note that by surrounding the two men in a circle, they run the risk of shooting each other.

John Wraith (Will I Am) is seen with a Heckler & Koch G36K fitted with a Heckler & Koch AG36 Grenade Launcher during the assault in Nigeria. This mission appears to take place in the 1970s and since the G36K was not introduced until the 1990s, the weapon seen here would be highly anachronistic.

Nigerian soldiers are seen during the first Department H mission in the film use what appear to be Zastava M70B1 rifles to fire on Stryker's men.

African soldiers are accidentally shot by a DSHk gunner while holding AKMs and AKMSs.

A Nigerian guard holding his rifle is surprised by Wade's superpowers.

One of Stryker's men fires his rifle at the mutants.

Some Nigerian soldiers also use the folding stock Zastava M70B2 rifle. Many members of the team have them slung over their backs, including James Howlett (Hugh Jackman), John Wraith (Will I Am), and Chris Bradley (Dominic Monaghan).

An African soldier with the rifle before Wade Wilson kills him.

Chris Bradley (Dominic Monaghan) holds the rifle as the team holds some villagers at gunpoint.

John Wraith (Will I Am) on the left holds the rifle.

James Howlett (Hugh Jackman) with his slung rifle as he confronts Victor.

David North/Agent Zero (Daniel Henney) uses an SVD Dragunov during the confrontation with Logan at the barn.

David North/Agent Zero (Daniel Henney) uses an SVD Dragunov during the confrontation with Logan at the barn.

Agent Zero with his Dragunov as he calls in air support.

A Humvee in hot pursuit of Wolverine (Hugh Jackman) fires a Browning M2HB at him as he drives away on a motorcycle. Wolverine then does a hard turn and flips the Humvee with his claws. One of the guns he destroys by chopping off the barrel with his claws, while another he uses to fire at the helicopter before it is destroyed by a rocket. The Browning M2HB is also seen mounted on the Higgins boat in the opening credits.

In a scene from the trailer, a helicopter gunner fires a Browning M2HB at Wolverine.

When Wolverine flips the Humvee, the Browning M2HB is visible. Considering the film takes place in 1979, the use of a Humvee is anachronistic, as the HMMWV/Humvee was introduced in 1984; in 1979 it was only in the preliminary design phase.

Victor Creed (Liev Schreiber) uses a Browning Automatic Rifle during D-Day before taking an MG34 from a German bunker.

Victor storms the beaches of Normandy armed with a BAR on the left.

Victor about to enter the Normandy beach with his Browning Automatic Rifle in hand.

The Browning M1919A4 machine gun is seen mounted on the LCVP that transports James and Victor before storming the beaches in World War II.

The Browning M1919A4 machine gun is seen firing behind James and Victor as they storm the beach.

A Nigerian soldier opens fire with a DShK heavy machine gun on Team X during the assault on the compound. The DShK here does not appear to be the common Browning M2 mockup seen in most films.

A Nigerian soldier opens fire with a DShK heavy machine gun on Team X during the assault on the compound.

A bullet from Agent Zero's Taurus causes the gunner to accidentally take down his own men.

The helicopter in pursuit of Wolverine (Hugh Jackman) has a pintle-mounted GE M134 Minigun, which the gunner uses in an attempt to kill him. The sound effect of the gun firing is far too slow for its actual cyclic rate (in fact, they use the same sound report when depicting the M2HB firing!).

In a scene from the trailer, the GE M134 Minigun on the side of the helicopter.

The GE M134 Minigun is fired by the helicopter gunner.

The gunner fires his GE M134 Minigun at Wolverine. Note that the sound effect of the M2HB is used here, despite that the minigun's rate of fire surpasses this.

Victor Creed/Sabretooth (Liev Schreiber) is seen firing an M60 machine gun from the side of a helicopter when he serves in the Vietnam War. Several of the Vietnam troops carry these also. Blob (Kevin Durand) is seen with an M60 when the team holds some villagers at gunpoint.

The soldier on the far left aims his M60 at Victor and Wolverine.

Blob (Kevin Durand) is seen with an M60 when the team holds some villagers at gunpoint.

Victor Creed (Liev Schreiber) is seen taking an MG34 off a mounting and using it against Nazis in a bunker on D-Day.

A German gunner fires his MG34 at U.S. soldiers.

Victor Creed fires his MG34 at the retreating German gunners.

Thomas Logan (Aaron Jeffery) uses a 12 Gauge Double Barreled Shotgun to kill John Howlett (Peter O'Brien) at the film's start. The old man who takes in James Howlett (Hugh Jackman) after he is turned into Weapon X also uses a side-by-side when he searches for him in his barn. One is also seen in the African's desk as he tries about to grab it to shoot Stryker and his team until Wraith pushes his hand away.

The African about to reach for his shotgun.

An old man searching his barn with his shotgun.

Several Model 16 Stielhandgranates can be briefly seen in the trench and on the belts of German soldiers during the intro sequence.

A heap of stick grenades on the left as Victor knocks out a German soldier. Note the size of the warhead that clearly identify them as Model 16s.