The Zastava M70 (Serbian: Застава М70) was Yugoslavia's domestically designed variant of the Soviet AK-47, and was the primary standard service rifle of the Yugoslav People's Army and later the Serbian Army (until its replacement by the Zastava M21). Developed and manufactured by Zastava Arms, the M70 was developed by reverse engineering AKs that Yugoslavia received from unofficial sources, and was manufactured without license, as Yugoslavia was a neutral nation during the Cold War. Yugoslavia began developing its AK in 1959, and first began unlicensed production in 1964 with the Zastava M64, which was modified to produce the more widely adopted M70.

The Zastava AKs featured many differences compared to Soviet AKs designs, many of which are clearly visible and immediately recognizable. Their most distinctive features are their longer forearms with 3 cooling vents.

The Zastava M70 is the standard variant of the Zastava AKs that saw the most use in the Yugoslavian military. It was most widely used and seen in the Yugoslav Wars of the 1990s. Yugoslavia also sold them to many countries such as Iraq (which produced a licensed copy known as the Tabuk, which lacked the grenade-launching sight) and Kuwait.

The M70 utilized a strengthened lower receiver, more akin to the RPK than the AK-47/AKM. It also has grenade launcher sights that when raised cut off gas flow to the piston allowing use of blanks for grenade launching; the rear trunion has a plunger to lock the receiver cover to prevent loss when used with a grenade launcher. Flip-up sights are standard equipment for optional night use: two dot rear and one dot front filled with phosphorescent material. M70 magazines are standard AK-47 type, but have a follower that blocks the bolt open when empty (much like the 30 round M1 Carbine magazine follower). Some of the variants also have finned barrels to aid in heat dispersion.

The Zastava M70 was produced in the following variants:

The Zastava M85 is a compact carbine manufactured by the Yugoslavian Zastava company, similar to the AKS-74U, albeit in 5.56x45mm NATO, with an underfolding stock instead of a side-folder, and a three-holed handguard. 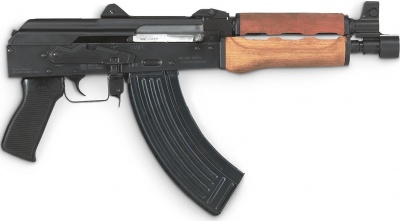 The Zastava M21 is a family of modern 5.56x45mm firearms developed by Zastava Arms as a replacement for the older M70 series of rifles. The M21 is currently the standard service rifle of the Serbian military, and is also used by security services in Bosnia-Herzgovina, Iraq and Cameroon.

The Zastava M21 is produced in the following variants:

The Zastava LKP PAP (Serbian: Polu-automatska puška, "Semi-automatic rifle") is a series of sporting rifles manufactured by the Yugoslavian Zastava company, which designed to comply with US firearms import laws.