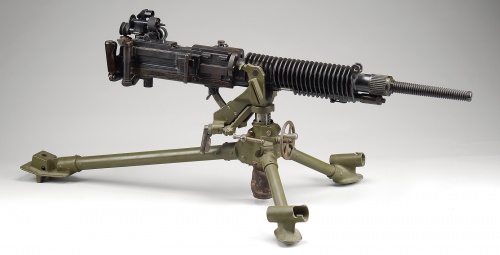 The Type 92 heavy machine gun was essentially a Type 3 heavy machine gun chambered for the larger 7.7x58mm SR round; as, with its cousin, it is a derivative of the Hotchkiss M1914 Machine Gun. Due to its relatively slow rate of fire, the allies nicknamed it "the woodpecker" while Chinese soldiers called it the "chicken neck" due to its appearance. The gun was almost always employed from a special heavyweight tripod which included holes on the front legs, allowing rods to be passed through so the gun crew could move the weapon by carrying it like a stretcher. Notably it was one of the few WW2 machine guns commonly issued with optics, with several sights being designed specifically for it.

While it was extremely accurate (only weighing five pounds less than a tripod-mounted Browning M2 while firing a rifle cartridge will do that) this was to the point that it was detrimental to its function as a suppression weapon, and it depended on an obsolete loading method with 30-round feed strips that had to be inserted extremely carefully to avoid misfeeds: just to make matters worse, the Japanese were not done with obsolete features and incorporated an integral oiler into the design to ensure reliability, which in the jungles of the Pacific theatre ensured quite the opposite. It also used specially-made ammunition which did not help with logistics at all (Imperial Japan used a total of four non-interchangeable 7.7x58mm Arisaka cartridges): rifle ammo would physically fit in the Type 92 but was unable to cycle it.

*Really the Type 92 should be considered a medium machine gun, as it fires a rifle bullet and does not have any capacity to accept a belt feed; only the enormous weight of the weapon (122 pounds with a tripod) really qualifies it as a "heavy" machine gun.

The Type 92 heavy machine gun and variants can be seen in the following films, television series, video games, and anime used by the following actors: