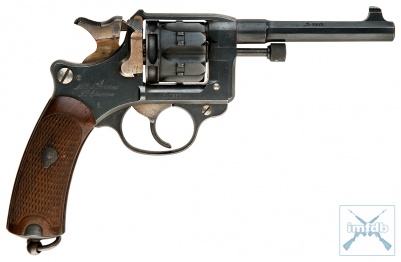 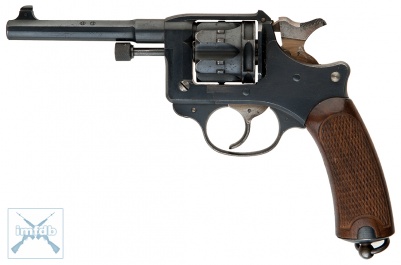 The Modele d’Ordonnance Mle 1892 revolver was based on an early revolver of the 1880s, which was itself partially designed by Nagant. The Mle 1892 replaced the Chamelot-Delvigne Model 1873 revolver upon its introduction and became the standard military sidearm for French forces until several years after World War I. It continued in French service for over half a century. It was developed by and produced at the government arsenal at St. Etienne and had some of the latest advances in revolver design of its time: a swing-out cylinder, a curved grip, a hammer safety, and an ejector rod which ejected all cases simultaneously. The Mle 1892s frame comes in two halves; the entire left side of the frame is a hinged plate that may be swung forward to allow access to the lock work. The major failing of the Mle 1892 was not in fact the weapon itself, but its underpowered ammunition. The Mle 1892 was also produced in Belgium and Spain, and there were some minor variations over the years; for example, some have round barrels, while others have hexagonal.

The Mle 1892 Revolver and variants can be seen in the following films, television series, video games, and anime used by the following actors: 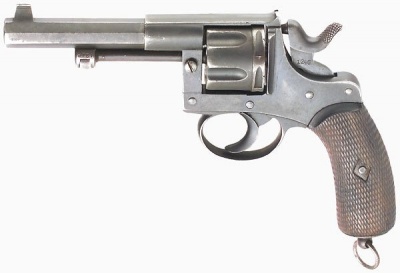 This revolver was developed specifically for the Dutch (East Indian) military. The M1891 revolvers and their slightly updated M1894 version were intended for the Dutch armed forces and police in the East Indies. Although described as a standalone development, it bears a clear resemblance with the Mle 1892, suggesting that both revolvers had the same origins. Dutch model is different with a solid frame with a one-round reloading system, as in the vast majority of other European revolvers of the time.