Allied is a 2016 WWII romantic thriller directed by Robert Zemeckis. Brad Pitt and Marion Cotillard star as Allied spies who fall in love during a mission and then it is discovered that one of them may be a double agent.

The following weapons were used in the film Allied:

RAF guard with this revolver in Pattern 1937 holster.

What appears to be a Webley Mk VI with a 4" barrel is seen being held and placed into a desk drawer by an unnamed S.O.E. officer (Simon McBurney). 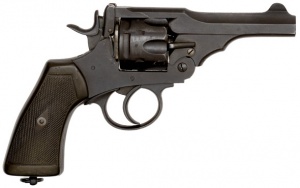 The unnamed S.O.E. officer placing his revolver with a shortened barrel back into his desk drawer.

The RAF guard at the airport has a Lee-Enfield No. 4 Mk I rifle over his shoulder.

An MG34 machine gun is shown mounted on a German half-track in Dieppe.

A crate of Mills Bomb grenades can be seen in a weapons shipment delivered via Lysander to French Resistance fighters in Dieppe. One of these grenades is later used by Max Vatan (Brad Pitt) to disable a German half-track.

French Resistence fighter in Dieppe took a Mills Bomb from the crate.