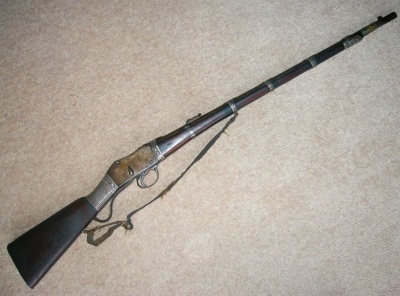 The Martini-Henry is a lever-action breech loading rifle developed as a quick loading cartridge rifle for use with the British Army. The weapon saw extensive service in the Zulu conflict and remained in use until it was phased out by bolt action Lee-Enfield rifles and Maxim machine guns. It uses a unique bullet, a cartridge built using a .577 brass casing pinched down onto a .45 caliber .450 bullet to fit the chamber. The head spacing in the chamber must have been pretty poor to fit a round with several crimps in the case, but it proved reliable and effective for the time it served.

The Martini-Henry Rifle Series and variants can be seen in the following films, television series, video games, and anime used by the following actors:

Peabody-Martini dropping-block action was widely used on German and Swiss Schuetzen (target) rifles, produced by numerous manufacturers in 1880s-1900s. Some models retained original Martini action, other, like Kessler system, were improved. These rifles were chambered in wide range of calibers, from 4mm Flobert to 10-11mm, but most popular cartridge was 8.15x46R.

The Martini Schuetzen Rifles and variants can be seen in the following films, television series, video games, and anime used by the following actors: