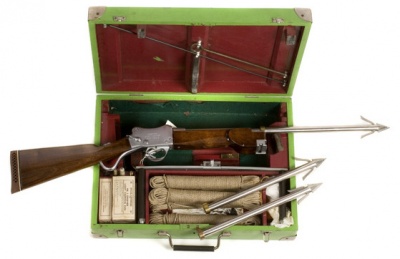 Made by W.W. Greener Ltd. Gunmakers of Birmingham (England), the Greener Light Harpoon Gun is designed for fishing and line launching. It functions by sliding a hollow harpoon over the barrel which is propelled by firing a specially made .38 Special high powered blank. The entire gun has a hard chrome lining for corrosion resistance. The harpoon gun was of a take-down design, and packed away into a specially made wooden case that contained the rifle, blank ammunition, harpoons, rope, detachable line holder and cleaning kit. The rifle design is based on that of the sporting rifles that W.W. Greener manufactured which were in turn based on the Martini-Henry rifle.