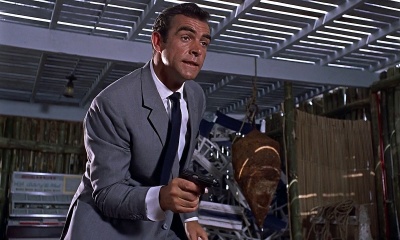 Sean Connery holds a Martini-Henry rifle as Danny Dravot in The Man Who Would Be King (1975).

Sean Connery holds an M1911A1 as Brigadier General Roy Urquhart in A Bridge Too Far (1977).

Sean Connery holds a Webley Green revolver as Allen Quatermain in The League of Extraordinary Gentlemen (2003).

Sean Connery (August 25, 1930 – October 31, 2020) was a Scottish-born actor well known for being the first actor to portray the character of James Bond in the EON Productions' official series of feature films. He portrayed the character in six features from 1962 to 1971, reprising the role in 1983's Never Say Never Again. Among his other notable roles were as Henry Jones Sr. in Indiana Jones and the Last Crusade, Brigadier General Roy Urquhart in A Bridge Too Far (1977) and John Patrick Mason in The Rock (1996). He also received an Academy Award for Best Supporting Actor for his role as Officer Jimmy Malone in The Untouchables (1987). He also was the father of actor Jason Connery. He passed away on October 31, 2020 after a long illness at the age of 90.