The FN MAG is a general purpose machine gun based on an upside-down Browning Automatic Rifle action with a feeding mechanism derived from the MG42, developed in Belgium during the 1950s and adopted by many countries around the world, including the U.S. The United States Military made some design changes and adopted it currently as the M240, however it is not identical to the FN MAG used in Europe, South America and the Middle East prior to the 1990s. The MAG-58 was the mainstay of foreign armies until the U.S. finally got rid of the M-60 in the early 1990s and adopted their own version of the FN MAG. There are three major incarnations of the FN MAG, in movies.

2) The L7 Machine Gun, adopted by Great Britain and used by some Commonwealth countries

3) U.S. incarnation known as the M240. All major variants of the FN MAG are very similar, except the earlier variants had no heat shields around the barrels and the buttstocks were wood. The newest incarnation, the U.S. M240 added heat shields and synthetic stock, plus a modified flash hider.

A scaled down light machine gun version chambered in 5.56mm was developed in the 1970s, the FN Minimi.

The FN MAG and variants can be seen in the following films, television series, video games, and anime used by the following actors: 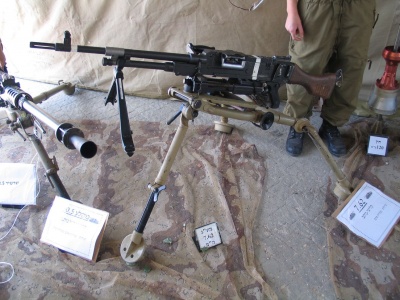 FN MAG 58 mocked up to resemble an M240B, with synthetic buttstock and heatshield added - 7.62x51mm NATO

British L7A2 General Purpose Machine Gun - 7.62x51mm NATO. This view of the left hand side of the weapon shows the mounting bracket at the rear of the receiver for sustained fire optics, a unique feature of the L7. Although this bracket can be removed, four screw holes will be visible on the side of the receiver.