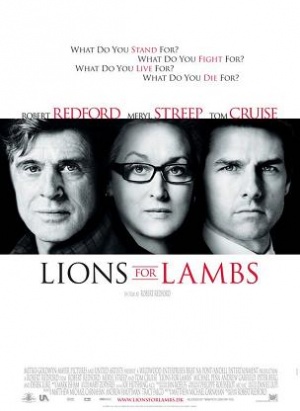 Lions for Lambs is a 2007 drama directed by Robert Redford that follows three interweaving stories that deal with the US involvement in the war in Afghanistan. The film was directed by Redford, who stars in the film along with Meryl Streep, Derek Luke, Michael Peña, and Tom Cruise.

The following weapons were used in the film Lions for Lambs:

An M240D machine gun is seen mounted on the rear loading ramp of a U.S. Army CH-47 Chinook helicopter carrying Rangers to an LZ in Afghanistan. When the helicopter comes under fire from Taliban on the ground, the gunner is killed and one of the Rangers onboard, Ernest Rodriguez (Michael Peña) mans the gun trying to return fire before falling out of the aircraft.

One of the more frequently-seen weapons in the film, the M4A1 carbine serves as the standard weapon of U.S. Army Rangers, fitted with ACOG scopes. After falling out of the helicopter, Ernest finds that his M4A1 is disabled, the stock having broken off on impact with the ground. Another Ranger, Arian Finch (Derek Luke) jumps out after Ernest and uses his M4A1 in an ultimately futile attempt to hold off approaching Taliban rebels, his M4A1 eventually running dry even after being given Ernest's magazines.

US Army Rangers are armed with M4A1's while being transported in Afghanistan.

Arian Finch (Derek Luke) with his M4A1 fitted with an ACOG scope.

The Beretta 92FS serves as Ernest's sidearm and becomes his main weapon after his M4A1 is damaged beyond use.

Rodriguez with his Beretta.

The AK rifle appears in the film as the main weapon of Taliban rebels in Afghanistan.