The following weapons were used in the film Malay Regiment:

A Communist bandit is seen carrying the Browning Hi-Power.

The first version of the classic pistol, initially developed by John Browning and completed by Dieudonné Saive (who would later design the FN FAL) following Browning's death, and adopted by Belgium in 1935, the FN P-35 - 9x19mm.

The communist guerrilla with his Browning HP waiting for the soldiers before ambushing them.

The MCP insurgent carries the Browning HP while providing cover from behind the tree.

The MCP lieutenant tries to opens fire his Browning HP when he spots the 17th RMR soldiers before he gets killed by Capt. Zainal Rashid.

The Smith & Wesson Military & Police revolver is used by Boon Seng (Lawrence Poh), the commander of the Malayan Communist Party in Gubir. 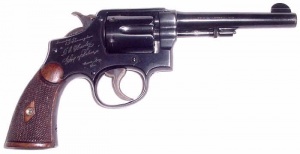 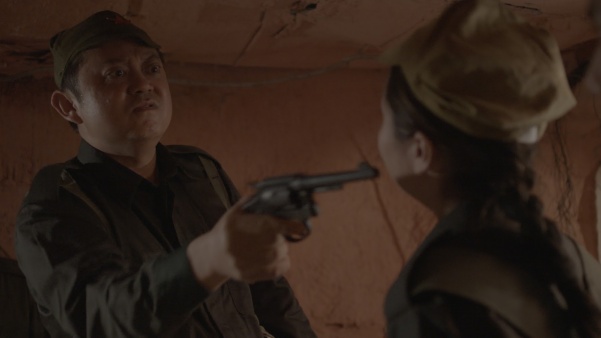 Boon Seng aiming the M&P at his own comrade.

The Sterling submachine guns is used by the MCP guerrillas.

MCP guerrilla loads the first round of his Sterling.

Communist with a Sterling SMG relaxing near his camp.

MCP guerrilla on guard with the Sterling SMG.

A Communist insurgent armed with a Sterling SMG gets shot by Lieutenant Hamid.

MCP guerrilla in the middle fires at Capt. Zainal with his Sterling SMG.

The M1 Carbine is also seen used by MCP guerrillas in the film. 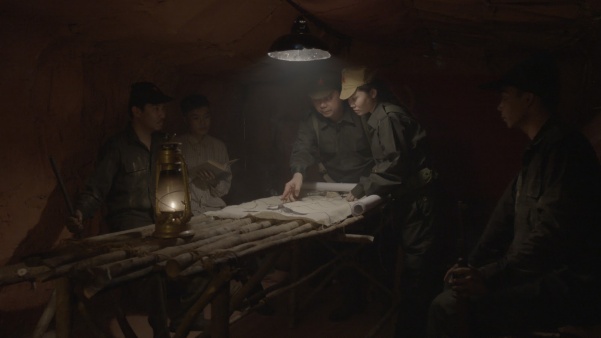 One Communist member on the right is seen carrying the M1 Carbine during the briefing.

The M16A1 assault rifle is the standard service rifle seen carried by the majority of Malaysian security forces, especially 17th RMR soldiers. These rifles are also seen in the hands of the MCP guerrillas.

An honor guard of 17th RMR troopers fire their M16A1s in salute during the burial of their eleven fallen soldiers. 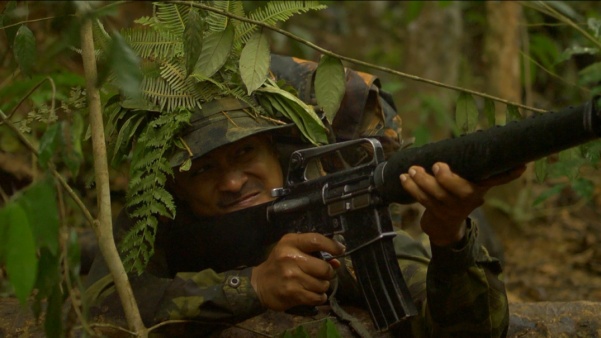 Lt. Hamid (Z. Zambri) opens fire with his M16A1 at the MCP positions.

The 21st GGK commandos holding M16A1s as they board the chopper. 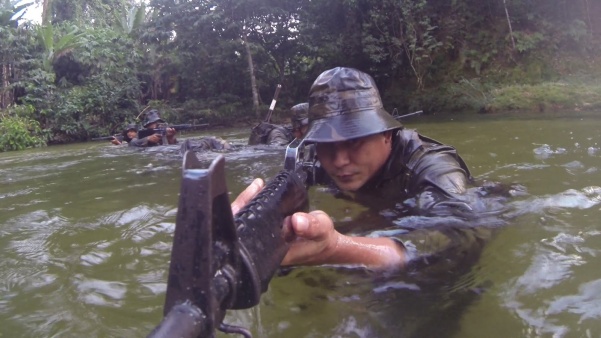 Soldiers armed with M16A1s emerge from the river while tracking down the communist camp.

The 17th RMR soldiers with their M16A1s crossing the river.

An MCP guerrilla engages soldiers with his M16 without a handguard.

The MCP guerillas on patrol with M16A1s. 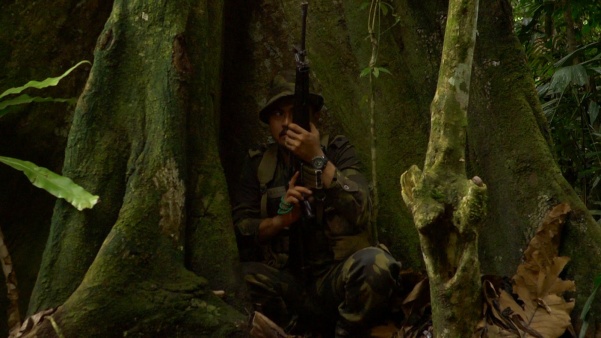 Capt. Zainal hides behind the tree with his M16A1 along with a talisman.

At least one of the Communists carry long-barreled, ancient looking bolt action rifle, which resembles the Murata Rifle.

Communists escort the prisoners. The man at the far left holds the long-barreled Murata rifle. Note the typical marking on the stock.

MCP spy with his rifle entering the jungle.

An MCP guerrilla with his rifle provides cover for his friends as they reach the food supply.

MCP guerrilla on the left fires his rifle.

The standard general-purpose machine gun for the Malaysian Army is the FN MAG, used since 1969 along with the L1A1 SLR for defensive or offensive missions.

A pair of 17th RMR machine gunners man the MAG while a soldier behind reports to his field commander.

The 17th RMR machine gunner armed with the MAG as he infiltrate the communist camp in the jungle.

Lines up the MAG while a soldier crosses in front of it.

A L2A1 is used by an MCP guerrilla during the battle against the 17th RMR soldiers.

The MCP insurgent with an L2A1 during the shootout with 17th RMR soldiers.

Both MCP guerrillas and 17th Malay Regiment soldiers use M79 grenade launchers throughout the movie. In real life, this weapon used by guerrillas to shoot down a Sikorsky S-61A4 Nuri chopper, causing the deaths of eleven soldiers along with the pilots and crews.

MCP grenadier loads his M79, which is obviously an airsoft dummy round.

MCP grenadier aims his M79 at the Sikorsky chopper. 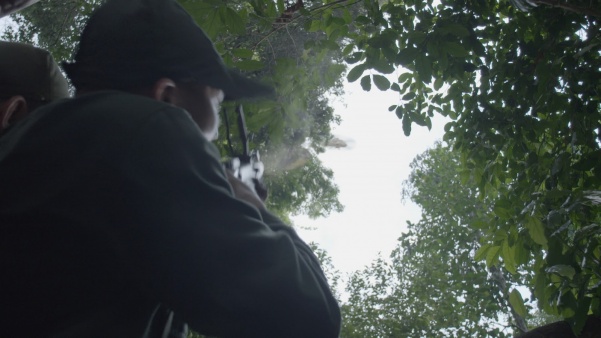 The MCP insurgent fires his M79 at the Sikorsky chopper.

The 17th RMR grenadier with his M79 alerts his comrades before he launches the round.

Closeup of the M79 fired.

An OTO Melara Mod 56 105mm Pack Howitzer is seen used by the Malaysian Army soldier to bomb the MCP camp. 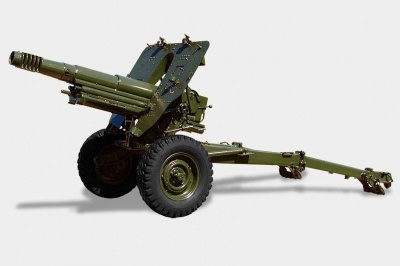 The Malaysian Army loads the shell into an OTO Melara Mod 56.

An army fires their Mod 56 at the MCP camp positions.
Retrieved from "https://www.imfdb.org/index.php?title=Malay_Regiment&oldid=1347223"
Categories: