The Sterling Mk.4 submachine gun is a British submachine gun which was in service with the British Army from 1953 until 1994 as the L2A3 when it was phased out with the introduction of the L85A1. Its earliest combat record however was field testing near the end of WWII with early prototypes. It is still manufactured and used by India as the Sub Machine Gun 1A1 alongside the suppressed 2A1 variant. A Chilean copy of the Sterling exists, known as the FAMAE PAF, which features a retractable wire stock and no barrel shroud.

The Sterling SMG and variants can be seen in the following films, television series, video games, and anime used by the following actors:

The Sterling Mark 6 (also called Sterling Mark 6 "Police") is a closed bolt semi-automatic civilian carbine version of the Sterling Mark 4 sold in the United States in the 1980s. It is has a 16" minimum legal length barrel. These were used in movies and television shows, sometimes with the barrel cut down and legally converted to full-auto fire. 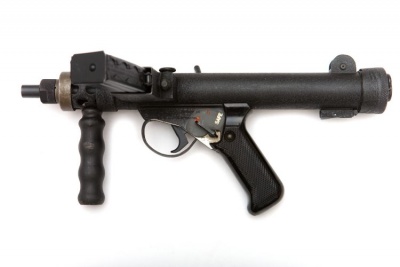 The CETME C2, also known as the CB-64, is a Spanish derivative of the Sterling Mk.4; though similar in profile, the CETME C2 features significant modifications to the design, and none of its parts are interchangeable with the Sterling. The most obvious differences between the C2 and the Sterling is the C2's improved pistol grip, straight 30-round magazines, and different stock design. It also has a relocated charging handle at the top of the receiver and different iron sights. The CETME C2 is made in both 9x19mm Parabellum and 9x23mm Largo.

The C1 is the Canadian version of Sterling SMG. It used stamped metal parts rather than cast ones, featured slight internal differences, and had different front sights and a larger, more square trigger guard that can swivel open. Canada produces and issues 30-round magazines for the C1, which feature a slightly different design from the L2A3's 34-rounders, though both magazines are fully interchangeable.

A non-firing model replica of the Sterling SMG is produced by MGC of Japan. This replica is primarily based on the Canadian C1, featuring its enlarged trigger guard and trigger, but has its own unique front sight found on neither the C1 nor the L2A3.

The MGC Sterling is notable for being the basis of the BlasTech E-11 blaster rifle found in the Star Wars franchise, specifically the ones in Return of the Jedi.