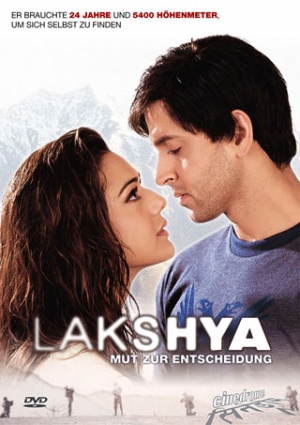 Lakshya (Hindi:लक्ष्य; English Translation: Target) is a 2004 Bollywood film directed by Farhan Akhtar. Hrithik Roshan stars as Karan Shergill, an unambitious young man who joins the Indian Military Academy and matures through his experiences as a cadet and later as an officer fighting in the 1999 Kargil Conflict.

The following guns were used in the film Lakshya:

The 1A1 Submachine Gun, an Indian clone of the Sterling SMG, is used by Punjab Regiment officers and radio operators, including Lt. Karan Shergill (Hrithik Roshan) and Capt. Jalal Akbar (Sushant Singh). 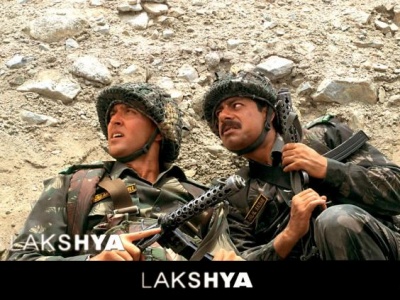 Cpt. Akbar radios for assistance after coming under fire.

Akbar fires the 1A1 SMG.

Soldiers fire their 1A1 SMGs.

A soldier fires his SMG during a night assault.

INSAS assault rifles are used by the officer cadets and by most of the soldiers of the Punjab Regiment.

An instructor puts down an INSAS.

A soldier fires his INSAS.

A Naik (Corporal) reacts when one of his comrades is shot.

Romanian PM. md. 90 rifles are used by Lt. Shergill and his company when they scale a mountain to attack a Pakistani stronghold in the film's climax. The Pakistani irregulars are also largely armed with PM.md.90s as well. The rifles are genuine Indian Army weapons, distinguishable by the lack of a foregrip handguard as seen in other versions of the PM md.90.

Col. Sunil Damle (Amitabh Bachchan) holds a PM. md.90 that was captured from the Pakistanis.

Shergill fires his PM. md.90 during the final assault.

In certain scenes, replica AK-47s are seen in the hands of Indian Army soldiers. 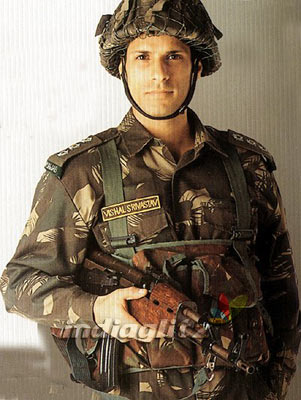 Soldiers fire AK-47 replicas, which are oversized compared to the real Kalashnikovs seen above.

Indian soldiers use the 7.62mm 1B Machine Gun as their main support weapon. Pakistani irregulars also are seen using the 1B at their mountain outpost.

A Pakistani treks up a mountain with a 1B Machine Gun on his shoulder.

A Pakistani mans a 1B Machine Gun.

The Pakistanis fire 7.62mm 2A1 Machine Guns from bunkers while repelling Indian assaults on their positions. The 2A1 is distinctive from other variants of the FN MAG since it lacks a buttstock and is usually tripod-mounted.

A 2A1 is fired at advancing Indian troops.

A 2A1 is seen as the Indians and Pakistanis fight hand-to-hand. Note the lack of a buttstock on the 2A1.

A Pakistani irregular totes a Carl Gustav Recoilless Rifle while infiltrating into the Kargil region.

During the final assault, Lt. Shergill and his men battle a group of Pakistanis who are manning 81mm mortars. 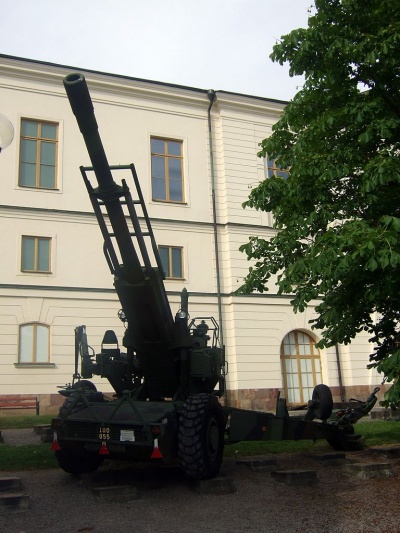