LOC Kargil is a 2003 Bollywood war film which dramatizes the 1999 Kargil conflict (Operation Vijay). It is one of the longest Indian movies ever made, clocking in at over four hours.

The following weapons were used in the film LOC Kargil:

The INSAS Assault Rifle is the the most commonly seen weapon in the movie.

The Sub Machine Gun Carbine 9 mm 1A1, a licensed Indian clone of the Sterling SMG, can be seen used by the Indian Army.

Soldiers from the 13 JAK Rifles, Indian Army are seen equipped with 1A1 submachine guns.

Soldiers from the 18 Grenadiers, Indian Army are seen equipped with 1A1 submachine guns.

Capt. Anuj Nayyar, 17 JAT carries a 1A1 in the Mushkoh Valley base camp.

1B Bren guns, a licensed copy of the Bren L4A4 made by Indian Ordnance Factories, is the main light machine gun used by Indian soldiers in this film. 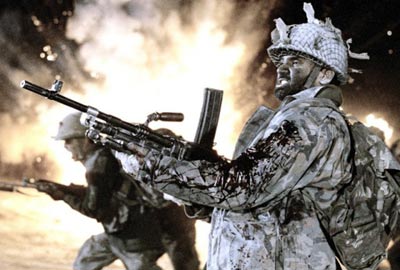 Lt. Manoj Kumar Pandey, 1/11 Gurkha Rifles is holding a Bren gun and a 7.62x51mm casing is seen ejecting from the gun.

Soldiers of 1/11 Gurkha Rifles are seen with Carl Gustav

The AK-47 is as common with the Pakistani soldiers as the INSAS is with the Indians in the film. In real life, the Pakistani Army uses the Chinese Type 56 and not the Russian made AK-47. These AK models are most likely replicas.

An AK-47 is seen when an enemy bunker is destroyed.

Along side the AK-47, Pakistani soldiers were also seen using the Indian version of the FN FAL, the 1A1 rifle. It should be noted that in real life Pakistani soldiers would be armed with G3A2 rifles built by Pakistan Ordinance Factories (POF) instead of FN FALs.

Soldiers from the 2nd Rajputana Rifles fire an FN MAG during the acclimatization period.

A Pakistani soldier is seen using an FN MAG.

A Bofors 155mm howitzer field gun is used in this film

Pakistani Army give artillery support to more than 3,000 Mujahideen across the LOC and inflict heavy casualties on the Indians.

Some SEPECAT Jaguars of the IAF.