Death is Nimble, Death is Quick

The following weapons were used in the film Death is Nimble, Death is Quick:

Sunny aims his revolver at Babs Lincoln during the kidnapping attempt.

Inspector DaSilva with an HW-1 revolver in hand is accompanied by a policeman with a Sterling SMG.

Sunny fires at pursuing police jeep during his attempt to escape on train.

Walker holds the revolver in the scene on Farrells' villa.

Rowland holds a revolver, taken from one of the henchmen.

Nitro with a revolver. 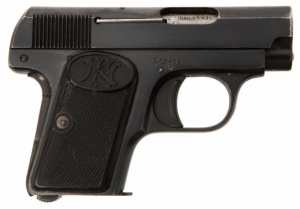 Inspector DaSilva with an HW-1 revolver in hand is accompanied by a policeman with a Sterling.

A sniper rifle is used by hitman Nitro (Siegfried Rauch) in attempt to kill Walker and Rowland.

Nitro shows his rifle to King.

A lever action rifle, supposedly of .22 caliber, is seen in hands of local zoologist Barrett (a cameo of movie director Rudolf Zehetgruber, credited as Rolf Zehett). Jo Walker (Tony Kendall) carries same looking gun in the scene on the Lake of Death, and Tom Rowland (Brad Harris) has this gun in the final scene.

Walker holds the rifle during the crossing of the Lake of Death.

The rifle in hands of Rowland.

Barrett takes the rifle back.

A rack of rifles is seen in police precinct in Colombo.

About a dosen rifles is seen at the background.

The firing is over.