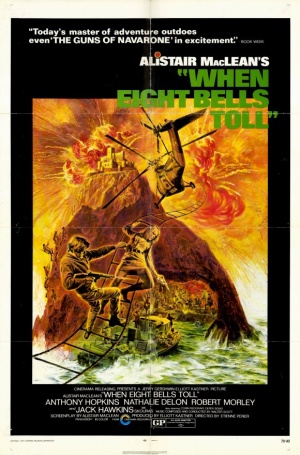 The following weapons were used in the film When Eight Bells Toll:

The Single Action Army Colt Peacemaker was held by a Naval Intelligence spy, Baker (Prentis Hancock) in the opening scene at Philip Calvert (Anthony Hopkins) on board of HMS Nantesville, unbeknownst to the latter that the marksman was already dead. The scene plays accurately as in the novel when the opening chapter (told from Calvert's point of view) gives the Peacemaker a backstory and in-depth description.

Baker (Prentis Hancock) aims his Peacemaker at the cabinet door.

Closer shot of the Peacemaker.

Calvert (Anthony Hopkins) stands before the gunbarrel of the Peacemaker.

Baker is revealed to be dead with the Colt Peacemaker still in his hand.

Inglis Hi-Powers are used by the smugglers. Lavorsky (Ferdy Mayne), head of the hijacking operation, and Captain Imrie (Peter Arne), a member of his crew, use one in the shoot out at the end of the film. 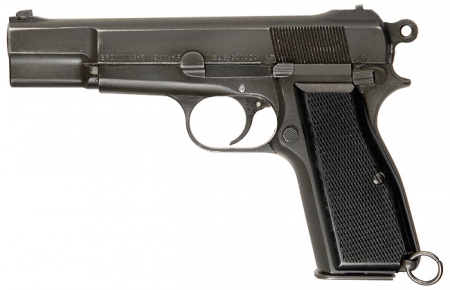 Captain Imrie (Peter Arne), armed with a Hi-Power pistol, orders his men to catch the spy on board.

Captain Imrie fires at Calvert with his Hi-power during the climactic shoot out.

Lavorsky (Ferdy Mayne) with Hi-power pistol during the climactic shootout.

Philip Calvert (Anthony Hopkins) uses an Enfield No. 2 revolver throughout the film. At one point, Uncle Arthur (Robert Morley) uses the same pistol, as well. 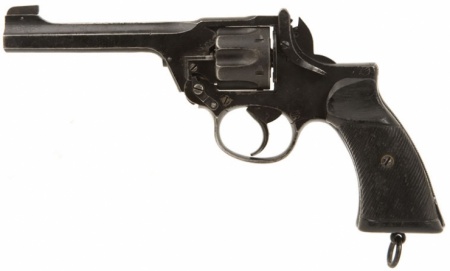 Calvert fires his Enfield No. 2 at the opposition attacking his yacht.

Uncle Arthur (Robert Morley) is armed with Calvert's Enfield on board of the yacht.

Calvert uses his Enfield No. 2 Mark 1 revolver at the beginning of the shoot out before using the Sterling SMG.

The smugglers can be seen using Sterling Mk. 4 submachine guns. Calvert (Anthony Hopkins) equips himself with a Sterling during the shoot out with the Hijackers at the end of the film. When Calvert enlists the aid of shark hunter Tim Hutchinson (Leon Collins) and his men to confront the smugglers, they arm themselves with Sterlings as well.

Hutchinson (Leon Collins) cleans his Sterling SMG in preparation for the expected battle with the smugglers.

Calvert (Anthony Hopkins) prepares to fire on the hijackers during the final shootout.

One of the hijackers fires his Sterling at Calvert.

FN rifles are used by the hijackers. At one point in the film, Calvert (Anthony Hopkins) is seen with an FN he has taken from a hijacker.The rifles have the flash hider of an L1A1, but the handguards and front sights as would be found on an FN FAL.

Calvert (Anthony Hopkins) uses a FN rifle with bayonet to hold a hijacker at bay.

One of the hijackers fires his FAL during the shoot out.

When the hijackers try to shoot down the helicopter Calvert is aboard, they are armed with STG-57 rifles. 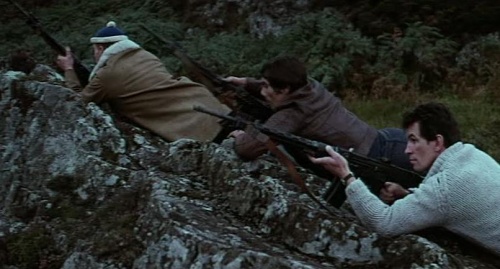 Hijackers armed with STG-57s move into position before firing on the helicopter carrying Calvert.

When the hijackers are actually shown firing the SIGs they appear to be prop guns with simulated muzzle flash, the most obvious clues being the oversized flash suppressors and the fact that the carrying handles are not workable but molded onto the side of the rifle. Based on this, they are possibly the same prop SIG 510s seen in On Her Majesty's Secret Service.

A British No. 36 Mills Bomb is used by Calvert (Anthony Hopkins) near the end.

Calvert (Anthony Hopkins) prepares to use the No. 36 grenade during the shoot out.
Retrieved from "https://www.imfdb.org/index.php?title=When_Eight_Bells_Toll&oldid=1414279"
Categories: