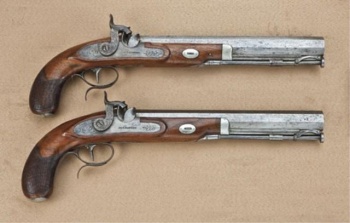 The use of pistols in duels became popular in Britain, France and America during the mid-eighteenth century. Initially standard holster or travelling pistols were mainly used, but by the end of the century special-purpose duelling pistols were being made by craftsmen in England, France, Germany, Austria and America.

The Percussion Dueling Pistol and variants can be seen in the following films, television series, video games, and anime used by the following actors: