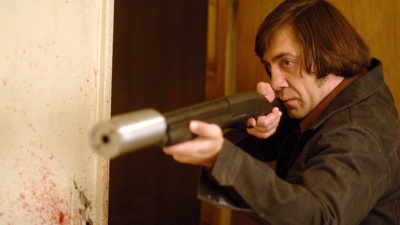 Javier Bardem with a Glock 17 as Raoul Silva/Tiago Rodriguez in Skyfall (2012).

Javier Bardem is a Spanish actor well known for his memorable turns as Raoul Silva in the James Bond film Skyfall and Anton Chigurgh in No Country for Old Men, a role for which he received the Academy Award for Best Supporting Actor. He also is part of a well-known family of actors, which includes his brother Carlos Bardem, his mother Pilar Bardem, his sister Mónica Bardem, and his wife Penélope Cruz.