Carlos Bardem with a Desert Eagle Mark VII pistol as Reggie San Pedro in Dance with the Devil (1997). 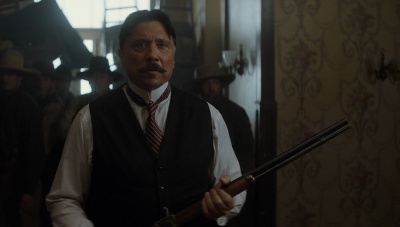 Carlos Bardem holds a Winchester Model 1873 rifle as Pedro García in The Son (2017).

Carlos Encinas Bardem (born 1963) is a Spanish actor who has appeared in such films as Dance with the Devil and Escobar: Paradise Lost in addition to his role as Pedro Garcia in the AMC series The Son. He also is part of a well-known family of actors, which includes his brother Javier Bardem, his mother Pilar Bardem, his sister Mónica Bardem, and his sister-in-law Penélope Cruz.