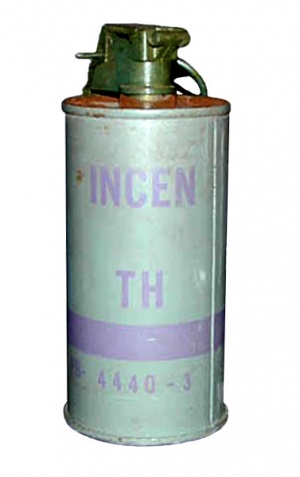 AN/M14 incendiary grenade. This is a pre-1987 example with the old color scheme (gray body with purple markings), modern examples have a red body with black markings. 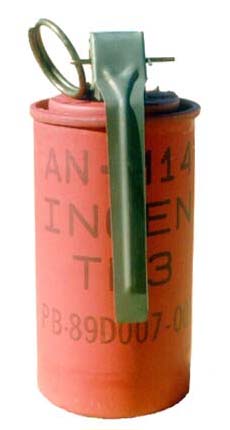 AN/M14 incendiary grenade. This is the modern color scheme and latest body variant which seems to be based on the M83 Smoke Grenade rather than the older AN/M8 HC smoke grenade casing. Intermediate models exist with the older body design but the newer markings.

The AN/M14 incendiary grenade or M14 incendiary grenade is an extremely high-temperature incendiary grenade developed by the United States. It uses the same fuze as the AN/M8 smoke grenade, and originally used the same sheet metal body too, while newer-production grenades seem to have switched to using the body of the M83 Smoke Grenade instead. Its filler is 26.5 ounces (751 grams) of TH3, a mixture of iron thermate, barium nitrate, sulfur and a binding chemical. This mixture burns at 4,000 degrees Fahrenheit (2,200 degrees Celsius) for 35-40 seconds, long enough to burn through a half-inch thick steel plate, and produces its own oxygen, meaning it can even burn underwater.

It is primarily used to sabotage enemy equipment, particularly vehicle engines, communications gear and heavy guns since the grenade produces molten iron which can weld components together as it cools. It does not have a bursting fuze: the thermate simply burns through the grenade body when it ignites. Because of this, the grenade has to be placed in direct contact with (ideally on top of) whatever it is being used against. The AN/M14 was also issued to aircrews (hence it getting the AN prefix) and could be used as a seamarker (since it would happily burn on water and burns incredibly brightly, enough to cause serious retinal damage at close range if the user looks directly at it) or for the destruction of sensitive equipment like radios and radars after a crash to prevent their capture.