Ed Harris holds a Mauser Karabiner 98k as Maj. Erwin Konig in Enemy at the Gates (2001). 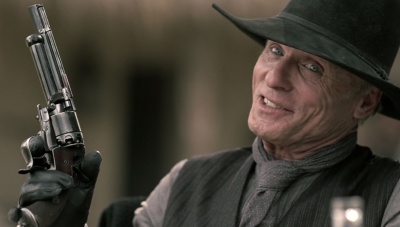 Ed Harris holds a custom LeMat Revolver as the Man in Black in Westworld.

Ed Harris is an American actor/director well known for such roles as John Glenn in the 1983 film The Right Stuff, Gen. Frank Hummel in 1996's The Rock, and Gene Kranz in 1995's Apollo 13, a role for which he received his third Academy Award nomination. He also has directed the features Pollack and Appaloosa and co-stars as "The Man in Black" in the HBO adaptation of Westworld. He is married to actress Amy Madigan.