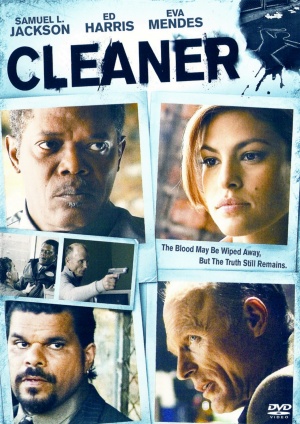 The following weapons were used in the film Cleaner:

When Tom Cutler (Samuel L. Jackson) arrives to clean the Norcut homicide, he pictures a Beretta 92FS firing a bullet into the corpse.

The Beretta after firing a bullet.

West Trenton Det. Eddie Lorenzo (Ed Harris) carries a Beretta 92FS Inox as his duty weapon. Tom Cutler (Samuel L. Jackson) opens a box revealing his Beretta Inox (most likely from his days as a West Trenton policeman as well), which his daughter Rose (Keke Palmer) fires during the climax.

A close up of the Beretta's hammer in Lorenzo's hip holster.

Tom looks at his old Beretta.

Lorenzo holds his Beretta Inox on Tom and Rose.

Lorenzo angrily raises his Beretta and aims at Tom.

A closeup of the Beretta in Lorenzo's hand.

A closeup of the Beretta's barrel, clearly identifying it as a product of "Beretta U.S.A".

Rose holds the still smoking Beretta before Tom takes it out of her hands.
Retrieved from "https://www.imfdb.org/index.php?title=Cleaner&oldid=784553"
Categories: