The LeMat percussion revolver was invented by a French American gunsmith and first issued in 1861. The gun was famed for its 9 shot capacity and an under barrel 16 or 18 gauge shotgun, and was favored by Confederate soldiers during the civil war. Production ceased mainly in 1865 but the gun was still made in limited quantities for quite a long time. Today, Pietta of Italy makes a reproduction model.

There were multiple variants and derivative models of the original muzzle-loading LeMat Revolver. These include a Pinfire model, a Centerfire model, and carbine versions of each of the three models.

The LeMat Revolver and variants can be seen in the following films, television series, video games, and anime used by the following actors: 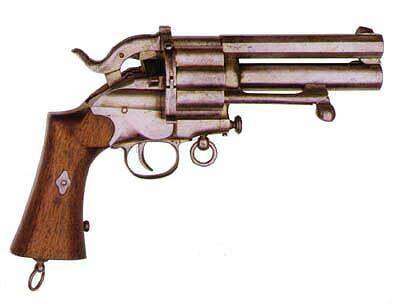 The Centerfire model of the LeMat Revolver (sometimes called the model 1869, apparently in reference to a 1869 patent for the revolver) is the final variation of the LeMat revolver.