The following weapons were used in the film China Moon:

The SIG is seen in the case.

The SIG is held by Rachel.

The slide is pulled by a gun dealer (Sandy Martin).

Rachel with the SIG.

A NAA Mini Revolver with folding grip is seen in the gun case. 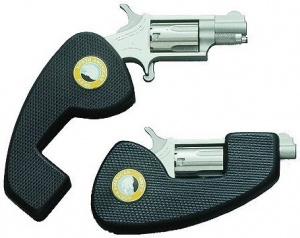 The NAA Mini Revolver is on the left.

A Smith & Wesson Safety Hammerless is also in the gun case. Based on the proportions it appears to be the .38S&W model and not the .32 version. 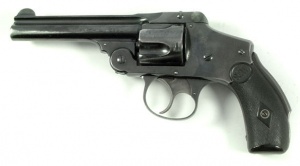 Smith & Wesson Safety Hammerless is on the upper right hand side.

The Beretta 92FS is seen in the hands of police officers as well as Detective Kyle Bodine (Ed Harris) and Rachel Munro (Madeleine Stowe).

The police officer on the right holds the Beretta.

The pistol is pointed at Lamar.

An officer appears to carry a Browning Hi-Power. Detective Lamar Dickey (Benicio del Toro) has the pistol in his holster.

Detective Lamar Dickey (Benicio del Toro) has the pistol in his holster.

The police officer on the left holds the Browning.

Rachel (Madeleine Stowe) grabs the Model 36 from the ground