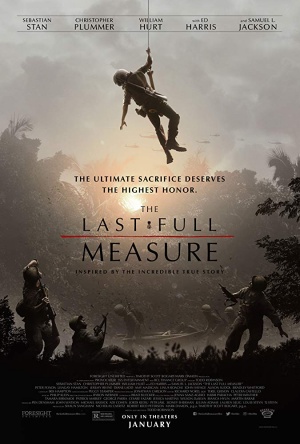 The following weapons were used in the film The Last Full Measure:

The majority of the US forces in the film are seen armed with what appear to be XM16E1 rifles.

Mockup of an XM16E1 (built from an M16A1 as the base) with 20-round magazine - 5.56x45mm. This example is the screen-used rifle used by Mel Gibson in We Were Soldiers.

A young Billy Takoda (Ser' Darius Blain) is seen armed with an XM16E1 rifle while fighting in Vietnam.

A young Kepper (Cody Walker) is seen with the XM16E1rifle.

Ray Mott (Ed Harris) uses the XM16E1 rifle while on a shooting range.

The AK-47 is the main rifle used by NVA forces in the film.

A young Jimmy Burr (James Jagger) is seen armed with a Remington 870 shotgun.

A young Jimmy Burr (James Jagger) is armed with the Remington 870 shotgun.

The M60 machine gun is used by American forces in the film.

At the right, a soldier opens fire with his M60.
Retrieved from "https://www.imfdb.org/index.php?title=The_Last_Full_Measure&oldid=1502081"
Categories: