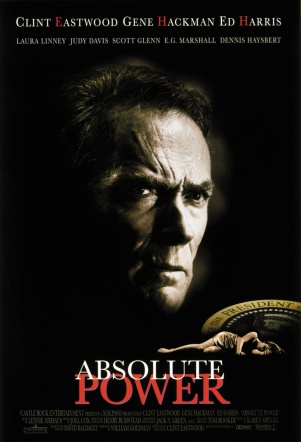 Absolute Power is a 1997 thriller directed by and starring Clint Eastwood as a master thief who while committing a heist unexpectedly witnesses a murder involving the President of the United States. He then finds himself the target of assassins when the crime is covered up. The film was an adaptation of the David Baldacci novel of the same name. William Goldman (Marathon Man, All the President's Men, Misery), wrote the adaptation and the cast included Gene Hackman, Laura Linney, Dennis Haysbert, Scott Glenn and Ed Harris.

The following weapons were used in the film Absolute Power:

Motorcycle officers are seen carrying Glock 17s in their holsters.

Motorcycle officers are seen carrying Glock 17s in their holsters.

While this shot is dark and unfocused, you can see the squared trigger guard and full length barrel, indicating this is a SIG-Sauer P226.

A SIG-Sauer P228, the standard at the time for the Secret Service, is seen on an office table.

A SIG-Sauer P228, the standard at the time for the Secret Service, is seen on an office table.

Seth Frank (Ed Harris) can be seen with a Smith & Wesson Model 10 with a 4" barrel in his holster.

Seth Frank (Ed Harris) with a Smith & Wesson 4" in his holster.

Secret Service Agent Tim Collin (Dennis Haysbert) and hit man Michael McCarty (Richard Jenkins), having both been contracted to kill Luther Whitney (Clint Eastwood) (each without the other realizing it) both use take-down Remington 700 rifles with major customizations to improve accuracy. The rifle used by Agent Collins is a similar configuration to the one used by Geena Davis in the film The Long Kiss Goodnight (released a year before).

Collin fires his Remington 700 free-hand, despite having a perfectly good Harris bipod to use.

The rifle on the right is a Remington 700s.

That's a pretty impressive group considering he was shooting free-hand.

Collin's Remington 700 in its case.

Collin blows away debris from the brass .30-06 round before loading it into the rifle.

Contract hit man Michael McCarty (Richard Jenkins) uses a Remington 700 action fitted with a suppressor and in a walnut target stock similar to one used for the Keppeler 300, a German rifle.

McCarty's breakdown Remington 700 in its case.

McCarty attaches a scope to his Remington 700.

McCarty checks the scope on his Remington 700.

McCarty loads a silver .300 Win Mag round into his Remington 700.

One of the two other agents at the range has some sort of take-down version of a Sako M995 TRG-S. It is probably the same rifle used in the film Most Wanted.

The rifle on the left is a Sako TRG-S. It can be identified by the placement of the Sako-logo in mid-magazine, the magazine catch and the long three lug bolt which clearly has a Sako-style shroud.
Retrieved from "https://www.imfdb.org/index.php?title=Absolute_Power&oldid=1279793"
Categories: