Carl Gustaf m/45BE - 9x19mm‎. Note the single/full-auto switch which was not present on Army models but was only offered on the "BE" police model. 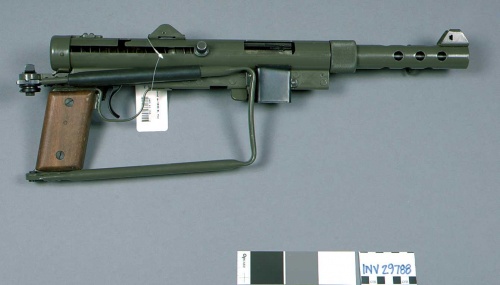 The Smith & Wesson Model 76 was designed to replace its use by Navy SEALs, and while the Model 76 was officially not in any way based off of the m/45, and any similarities are supposedly purely coincidental, the resemblance is unavoidable, especially in the characteristic stock. They also use identical operating systems and controls. In fact, the only real difference between the two is the grip and sights.

The Carl Gustaf m/45 and variants can be seen in the following films, television series, video games, and anime used by the following actors: