Man on the Roof, The

The Man on the Roof (Mannen på taket) is a Swedish 1976 crime/action movie based on the 1971 Sjöwall-Wahlöö novel "The Abominable Man" (org. "Den vedervärdige mannen från Säffle"), (literary: "The repulsive man from [the city of] Säffle"). It follows Homicide detective Martin Beck (Carl Gustaf Lindstedt) in his investigation of a brutal murder of a fellow policeman. The investigation eventually leads to a shootout in downtown Stockholm where a mad gunman fires on anyone wearing a police uniform.

The following weapons were used in the film The Man on the Roof:

Detective Gunvald Larsson (Thomas Hellberg) carries a Smith & Wesson Model 52 pistol during the movie. Although the pistol fires the "wadcutter" round, (for paper-targets only), the gun itself looks enough like a deadly piece of hardware for the unitiated. 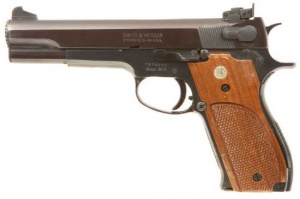 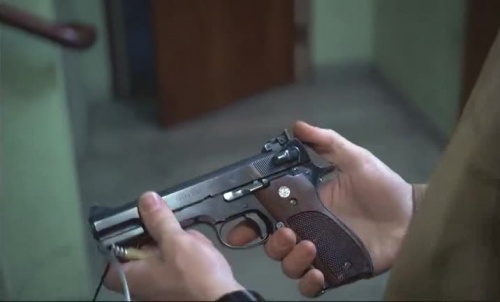 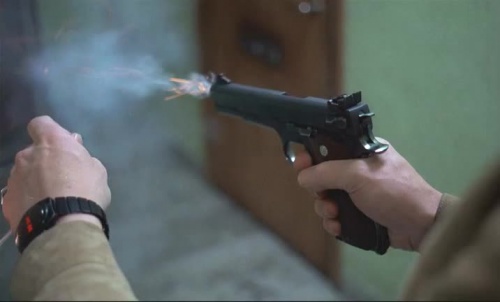 Larsson fires his S&W 52 to light a fuse connected to a breeching charge. There is no recoil, brass ejection or cycle, indicating the gun is either a prop or was otherwise rigged to fire only a small flame. 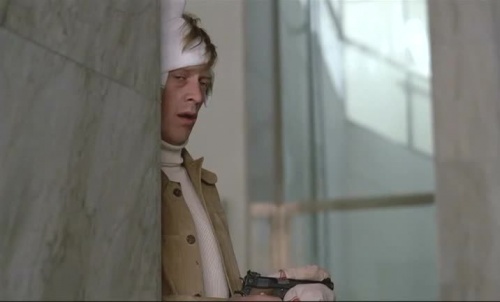 A wounded Larsson brandishing his S&W Model 52 during the final shootout.

Police Lieutenant Martin Beck (Carl Gustaf Lindstedt) and uniformed police carries a Walther PP pistol, which was the standard service pistol of the Swedish police until it was replaced by the SIG-Sauer P226 (and later SIG-Sauer P-models) in the mid to late 1980's. In the movie the Walther PP is never fired by any character. 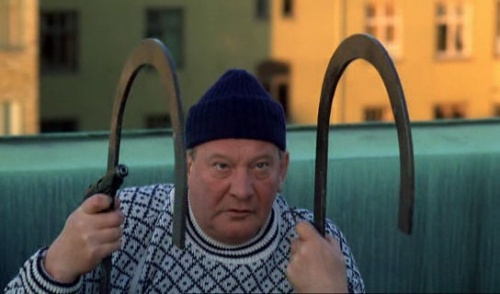 Martin Beck with his Walther PP.

Both the the novel and the movie are quite specific about the pistol that mad gunman Åke Eriksson (Ingvar Hirdwall) uses which is a Hämmerli International pistol. The movie version looks like a "Walther/Hämmerli Olympia", or it could be a pre-war Walther Olympia. 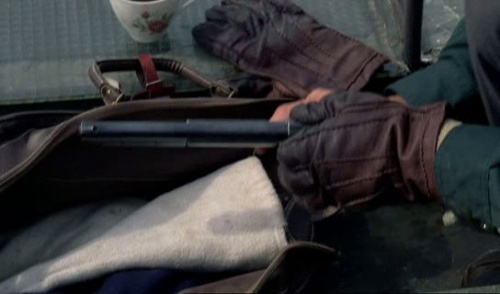 Åke Eriksson brandishes a .22 LR pistol during the final shootout. 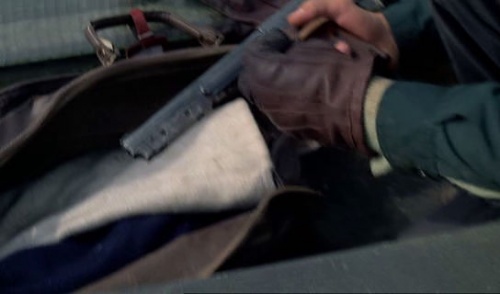 Sideview of the .22 LR. Note the thick thumb-rest and the barrelweight. 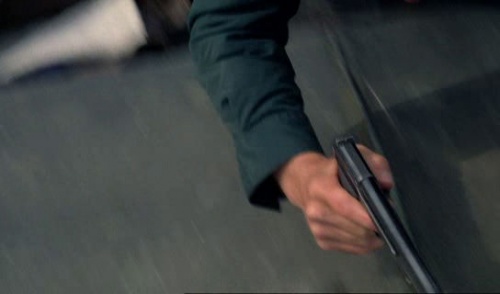 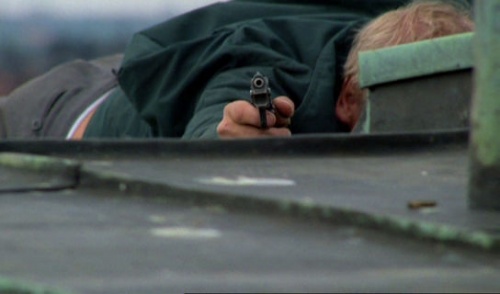 Frontview of the .22 LR pistol.

When it's time for the final storming of Eriksson's position, Detective Gunwald Larsson asks for volunteers to come up with him. A civilian who owns his own 1st Series Colt Woodsman volunteers to go up with the police task force. The "deputizing" of a civilian is strictly forbidden in Sweden, both then (1976) and present time, which is confirmed by Larsson's boss. Larsson, being a maverick, goes ahead anyways. 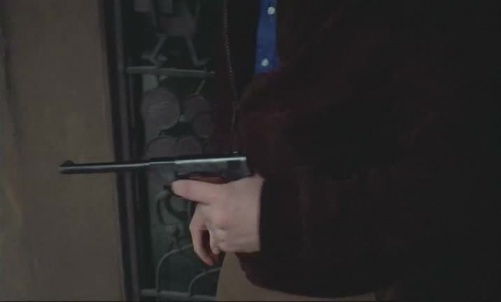 The Carl Gustav M/45B is used by members of the Swedish "Piketenheten", (literary Picket Unit, which is the Swedish version of S.W.A.T), during the shootout. It is also called "Piketen". 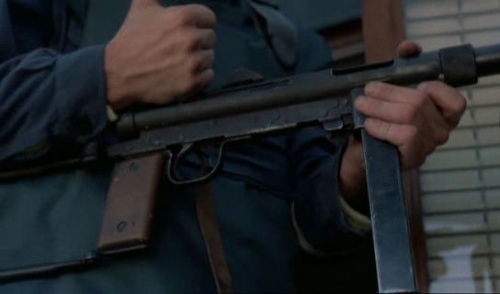 A member of the "Piketen" preparing his M/45B. This version does not have the selector switch meaning it was probably on loan from the Swedish Military as opposed to a genuine Police variant. 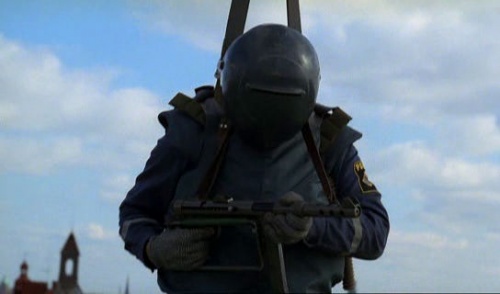 Another police officer with a M/45B preparing to insert via helicopter on the roof where the gunman is holed up. He is wearing a Huvudskydd m/69 bulletproof mask which was the standard of the Swedish Piketenheten from 1969 up until modern times. 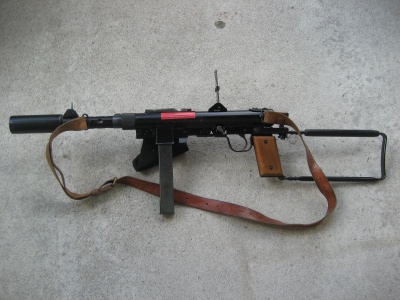 The CG M/45BE - Tear gas launcher. The red sticker on the weapon was to act as a reminder that the weapon was a tear gas only weapon (which fired blanks as a propellant) and not to be used for regular ammo usage. 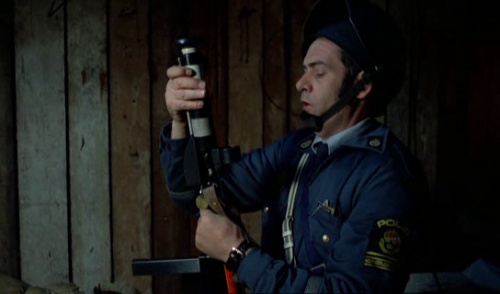 A "Piketen" officer attaches a tear gas grenade to the BET 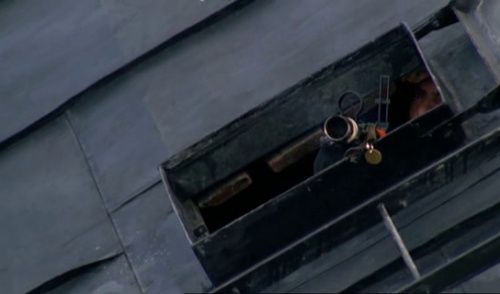 Frontal site of the BET

In the shootout the gunman Åke Eriksson (Ingvar Hirdwall) is both seen and described as using a bolt-action rifle, described only as a "Mauser" in-movie, fitted with a scope. The gunman is most likely using the 6.55 mm "Swedish Mauser" due to its origin, long popularity and availability in Sweden. Some 600,000 rifles were made between 1898 to 1925. This rifle (including variants) were used in the Swedish Armed Forces from 1896 and throughout most of the 20th century. In 1976, there would have been no lack of Swedish Mausers available for filming of the movie. The version shown in the movie has a bent down charging handle which probably makes it a model from the 1930s onward.

In both the novel and movie, the gunman is described as specifically using a Mauser bayonet to kill his first victim.

Mauser 1896/38 Rifle (Carl Gustaf) - 6.5x55mm. This version does not have a bent-down charging handle unlike the one in the movie, but by early World War 2 alot of the old Swedish Mausers had been converted from straight to bent handles. 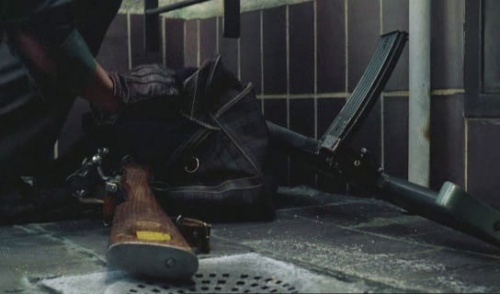 Swedish Mauser with a scope and bent down bolt

In the original novel the gunman uses a M1944 Johnson machine gun throughout the shootout. For the movie, a FN FAL rifle was modified to look like a Johnson machine gun, what can be identified by a number of signs. The charging handle is on the right side on the original weapon, but on the left in the FN FAL movie version. The carrying handle of a standard FN FAL is also obvious in the movie-version of the 1944 MG. The original Johnson has a left-side ammo feed, and therefore in the movie-version of the MG, a false magazine (taken from the Sturmgewehr 44) had been attached on the left side of the FN FAL. For scenes that required the FN FAL mockup to actually be fired the camera was angled or the weapons bottom part (which housed the necessary FN FAL magazine not present on the 1944 MG) was otherwise concealed.

A FN FAL - 7.62x51mm NATO. This particular version has a folded bipod but is otherwise almost identical to the FN FAL. 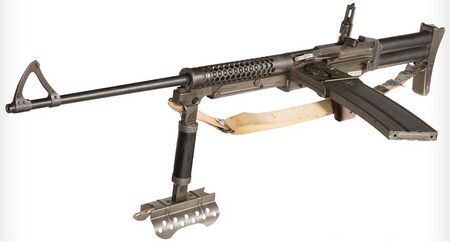 Later M1944 Johnson LMG - .30-06. Judging by the look of the movie-mockup, it was this Johnson-model the FAL was supposed to represent.

Good view of the fake magazine from StG-44. 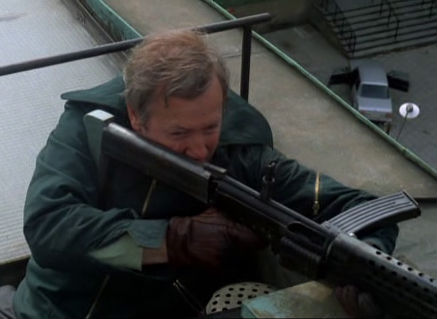 Åke Eriksson (Ingvar Hirdwall) with his mockup Johnson LMG. The original FN FAL rear sight seems to have been removed and a copy of the MG 1944 rear sight welded on further ahead. Note the classical FN FAL carrying handle and the equally distinctive breech. The magazine is also different from that of a real Johnson LMG. 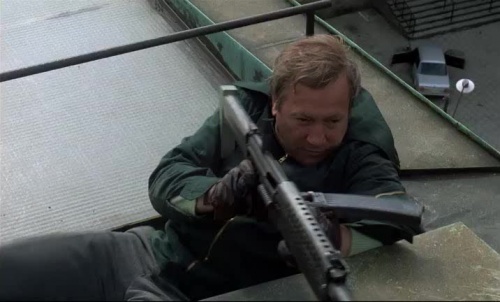 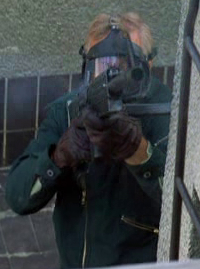 Åke Eriksson firing at the police. Note the FAL-magazine inserted at the bottom of the weapon. 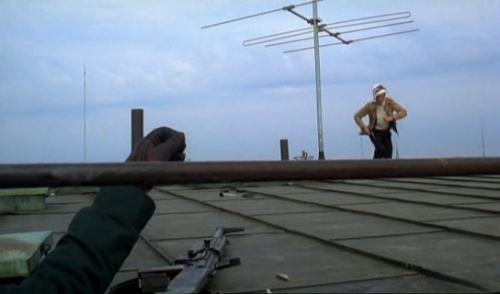 Sideview of the mocked up FN FAL during the final assaumt on the Eriksson's position. In this scene, the fake side magazine is removed, and seen the mount for it on the rifle.
Retrieved from "https://www.imfdb.org/index.php?title=Man_on_the_Roof,_The&oldid=1330009"
Categories: