Angels of Terror (Die Tote aus der Themse ("The dead body in the Thames")) is a 1971 German detective movie directed by Harald Philipp. Despite the film is listed in Edgar Wallace film series, it isn't based on any Wallace's work. Myrna Fergusson worked for a drug organisation but after she gave information to police, she is killed by a drug dealer. Her body mysteriously disappears. Myrna's sister Danny arrives from Australia and begins her personal investigation of the case.

The film is the 30st installment in the Rialto Film studio Edgar Wallace film series (1959-1972). It was the last shot in Germany; two Italian films followed before the end of the series.

The following weapons were used in the film Angels of Terror (Die Tote aus der Themse): 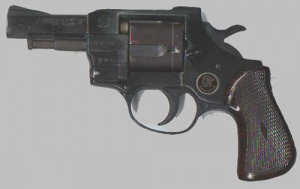 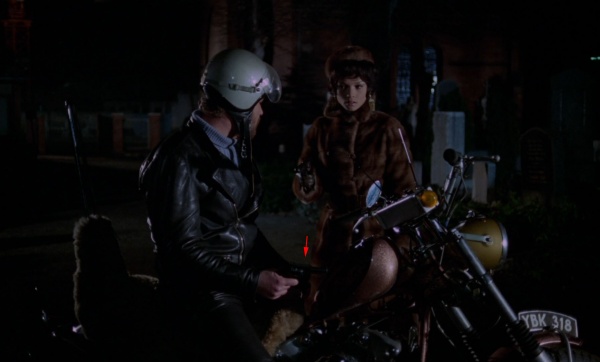 Donovan draws his revolver in the opening scene. 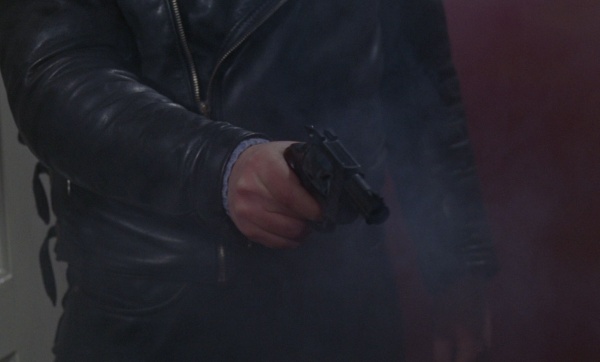 Donovan fires his revolver in the scene in Myrna's room in hotel. Note the ramp front sight that allows to differ the HW-1G from the original HW-1. 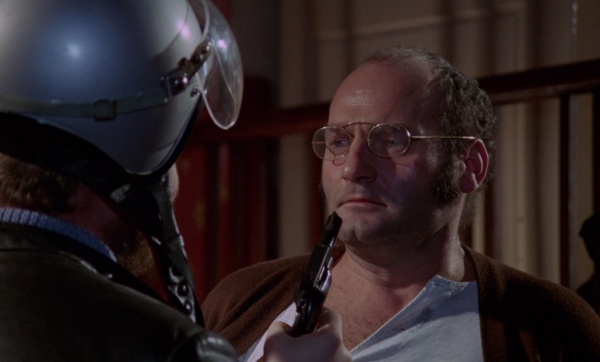 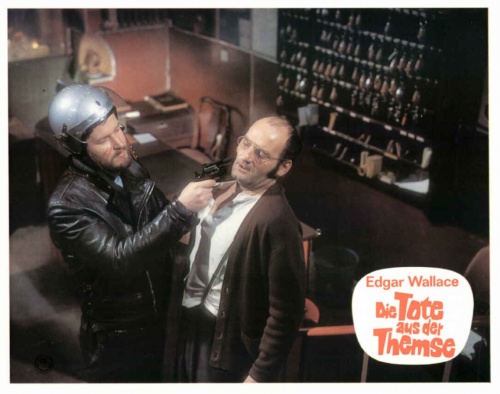 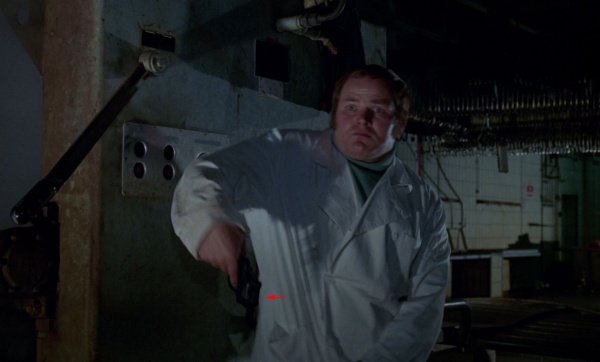 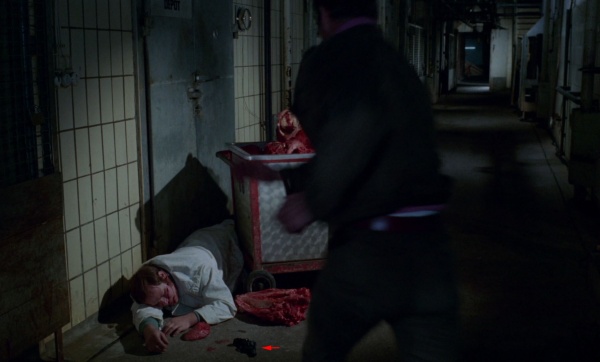 The revolver of the henchman lies on the floor. The ramp front sight can be seen.

In the opening scene Myrna Fergusson (Lyvia Bauer) takes a handgun from the second drug dealer. This weapon is seen only in darkness but the promotional image allows to identify it as a Walther PPK. William Baxter (Werner Peters) holds a PPK during the kidnapping of Danny Fergusson. 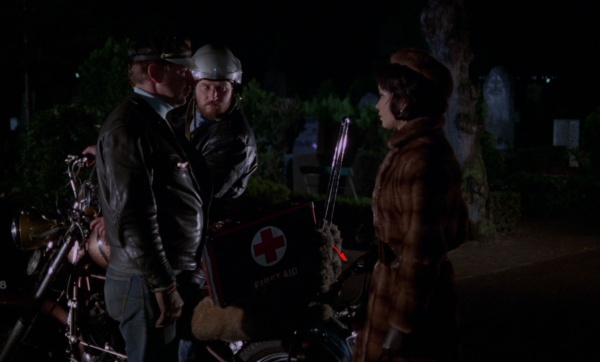 I thought we were supposed to be unarmed. Myrna takes the pistol from Donovan's accomplice. 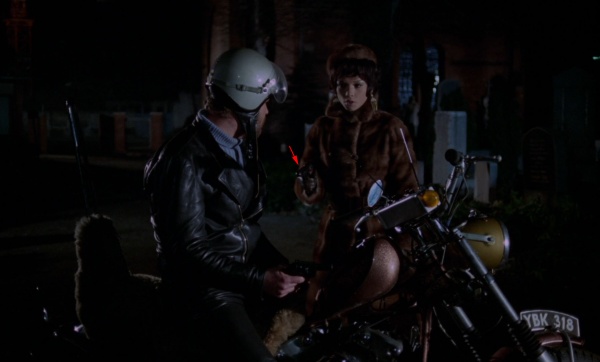 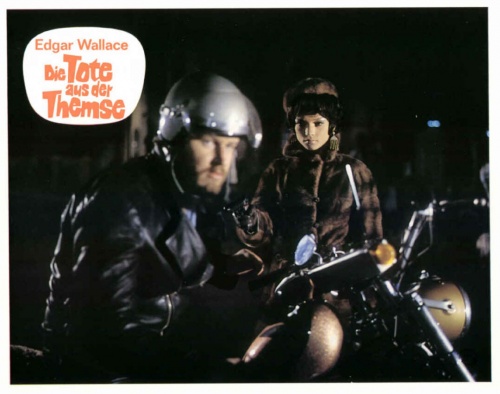 The pistol in Myrna's hands is seen much better on a promotional image. 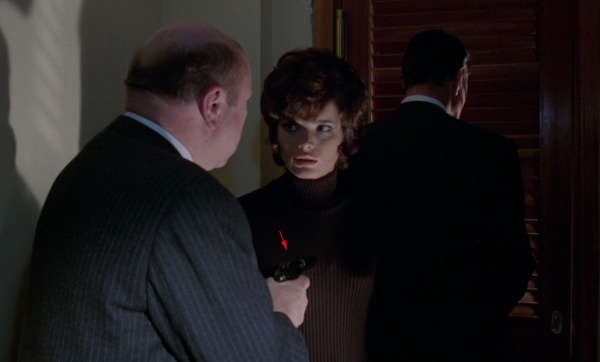 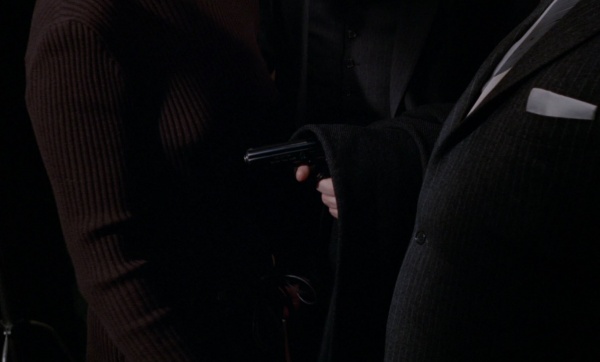 Another view of Baxter's pistol. The marking on the slide matches the early version produced in 1930s-1940s.

The shooter whose identity is revealed only in the final scene uses a Preetz Model 65, a German produced clone of Armalite AR-7. The gun is fitted with the sniper scope and the fake sound suppressor.

Preetz Model 65 - .22 LR. The screen gun has the barrel without cooling fins, like this sample.

Preetz Model 65 with pistol grip - .22 LR. The screen gun has pistol grip, like this sample. 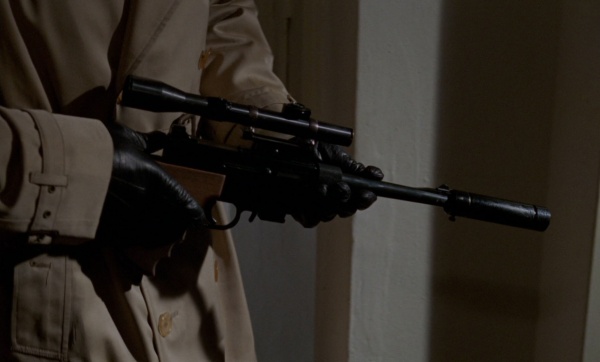 The shooter holds his weapon during the first assassination. 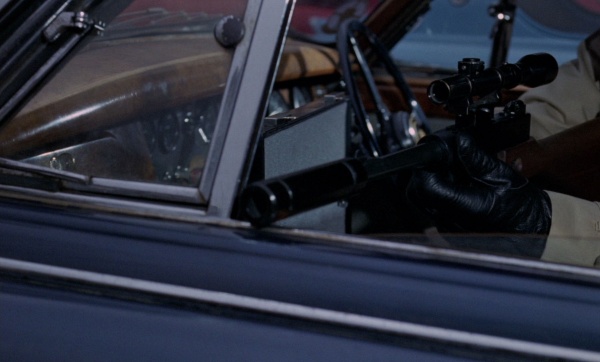 The shooter fires from the car. 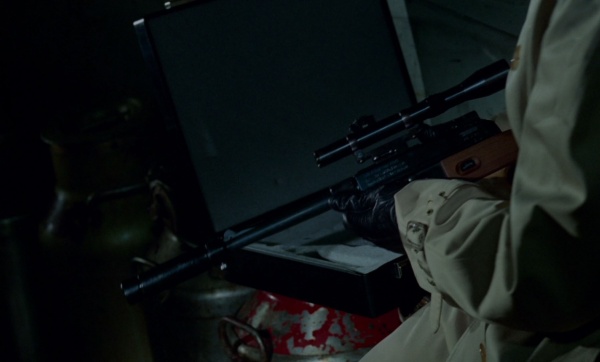 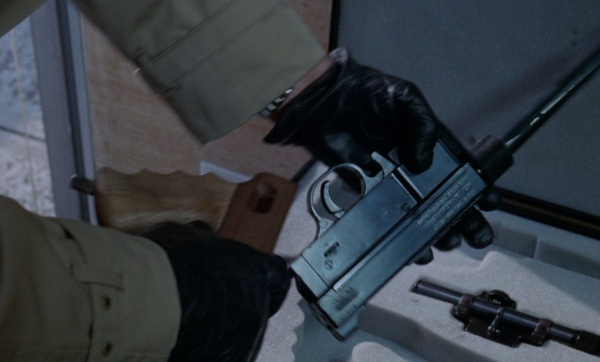 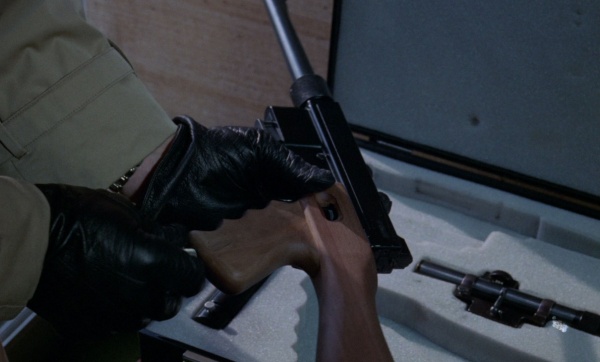 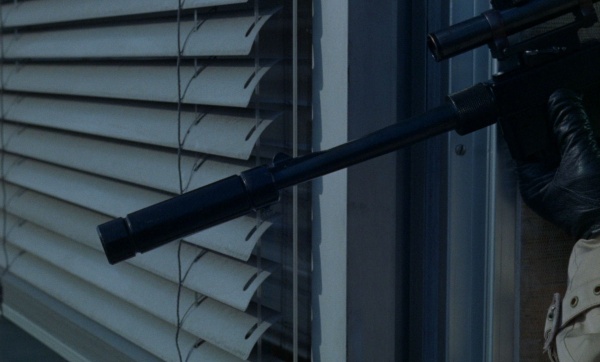 A good view of the barrel and suppressor. 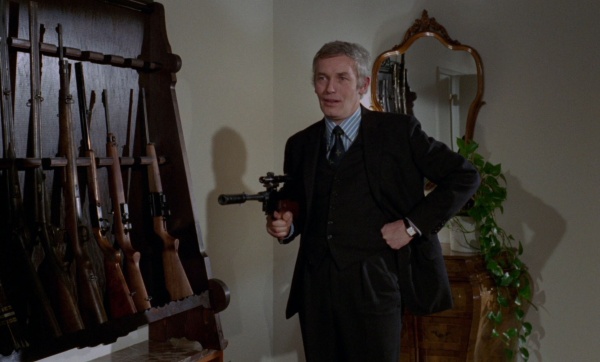 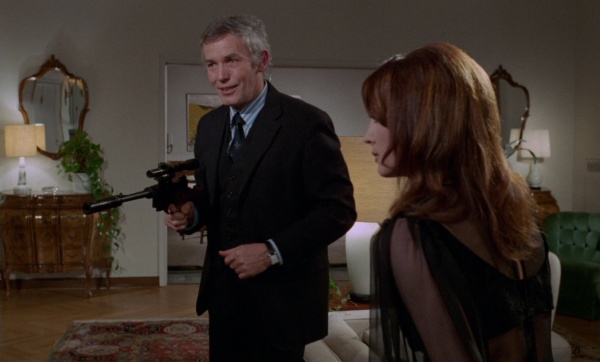 Dr. Ellis (Günther Stoll) takes the rifle from the gun rack in the climactic scene. 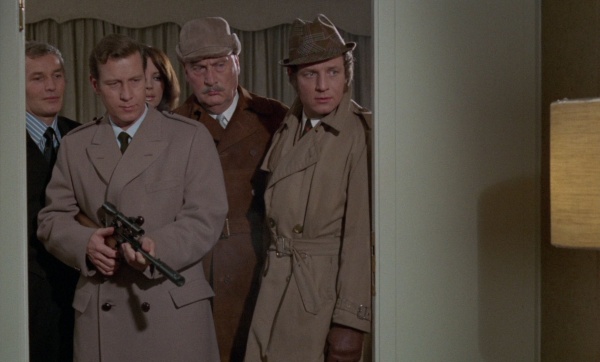 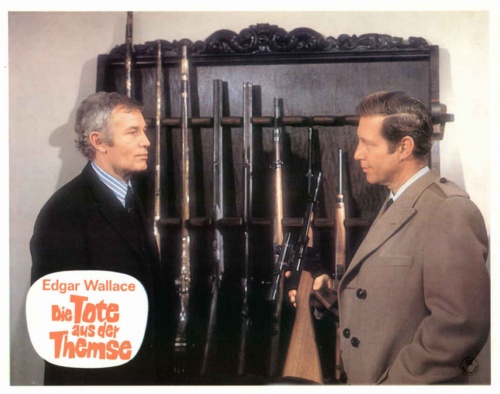 A gun rack in Dr. Ellis' apartments contains a number of long guns (from left to right): 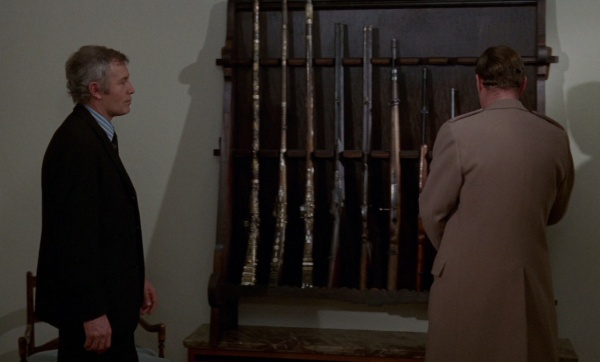 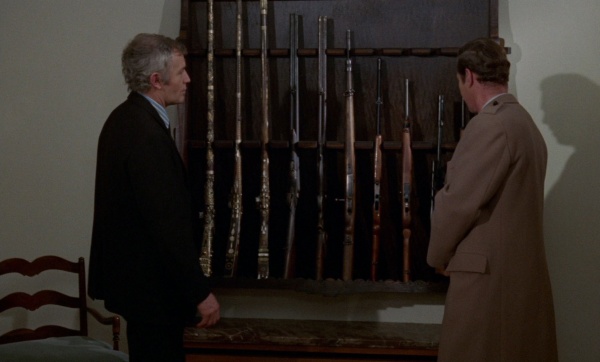 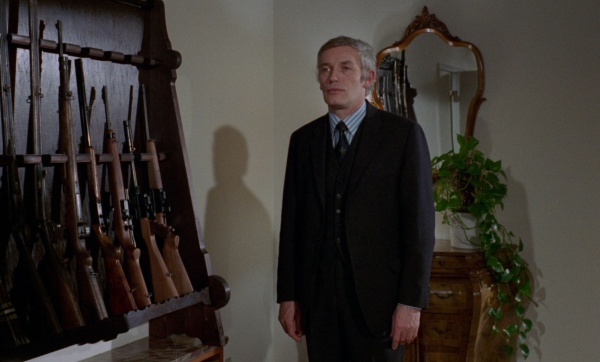 Another view of the gun rack. The muskets at the left aren't seen but other guns are seen better.

The carbine at the far right is seen better when Dr. Ellis takes the Preetz Model 65 gun from the rack.

A row of Napoleonic era artillery piecies is seen on the embankment of the Thames. 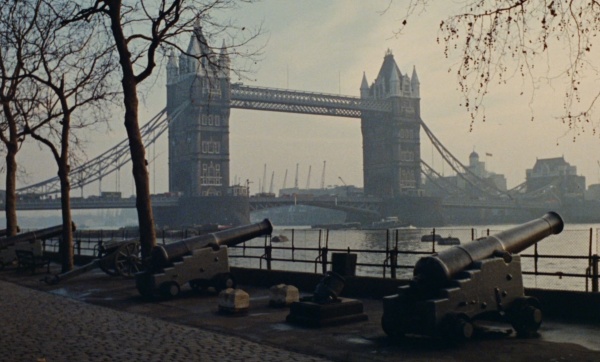 Three naval cannons, a field cannon (at the left) and a siege mortar (in center).