Wild Wild West is the 1999 feature film adaptation of the 1960's Western television series that starred Robert Conrad as James West. The adaptation was directed by Barry Sonnenfeld (Men in Black) and stars Will Smith as James West and Kevin Kline as Artemus Gordon. The cast also includes Kenneth Branagh and Ted Levine.

The following weapons were used in the film Wild Wild West:

The main sidearm of U.S. Army Captain James "Jim" West (Will Smith) is a Colt 1860 Army revolver with a two-tone finish and custom "JW" grips. Several other persons use the same. 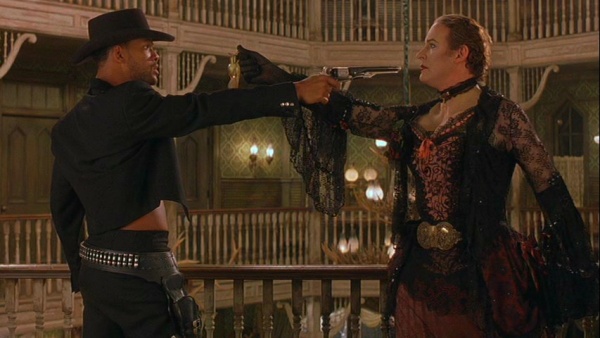 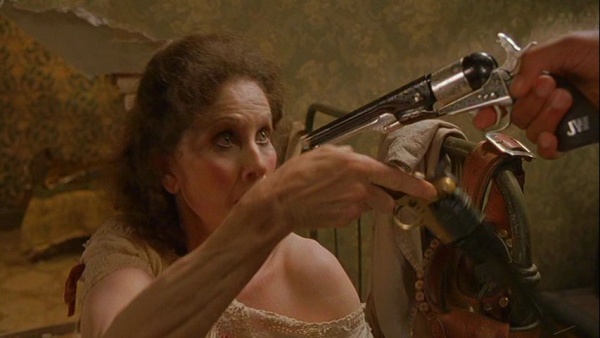 "That'd be an awful career decision, darling."
West points his Colt 1860 Army in a prostitute's face as she is reaching for her john's pistol hanging off the bedpost. Note the "JW" on the handle.

When West fires his sidearm into the roof of the White House to convince a disguised Gordon that he is impersonating the President, the gun is the subtly different Colt 1861 Navy. 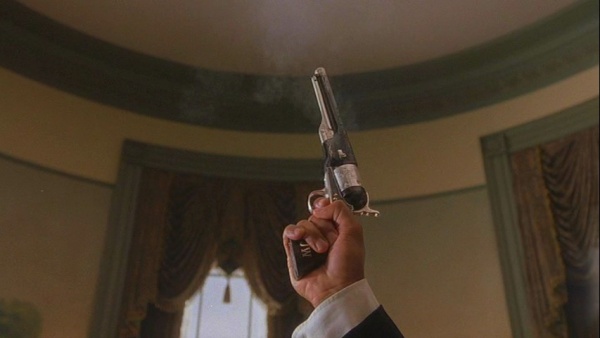 West fires his sidearm into the ceiling. This is actually a Colt Blackpowder Signature Series 1861 .36 Navy converted to .38 by Kenny Howell. Two guns were sent and converted, they were later sold at the Stembridge Auction - Regards, Tecolote 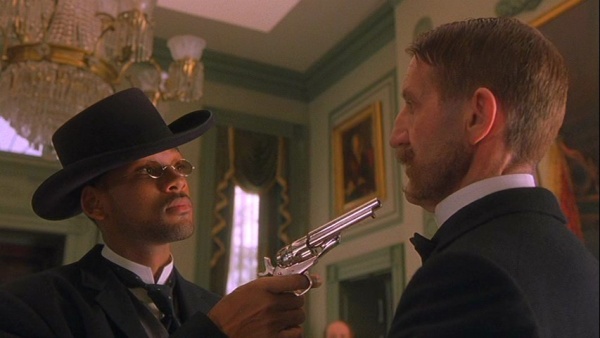 "Now give me that gun!"
"What, that one? What about that one?"
West draws his back-up Colt Police.

General McGrath (Ted Levine) carries a Single Action Army as his main sidearm. He uses it to casually gut-shoot an irate patron at Fat-Can's brothel, and threatens Dr. Arliss Loveless (Kenneth Branagh) with it as his men are slaughtered. 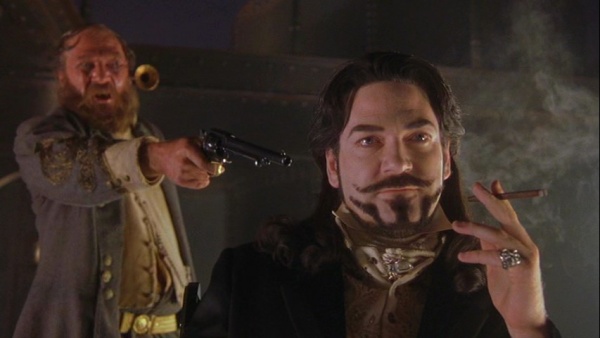 McGrath: You go straight to hell, sir!
Loveless: After you, sir.

A nickel Remington 1875 is seen pulled on West during Loveless's ball.

The custom Remington 1875 handled by Leonardo DiCaprio in The Quick and the Dead (1995). 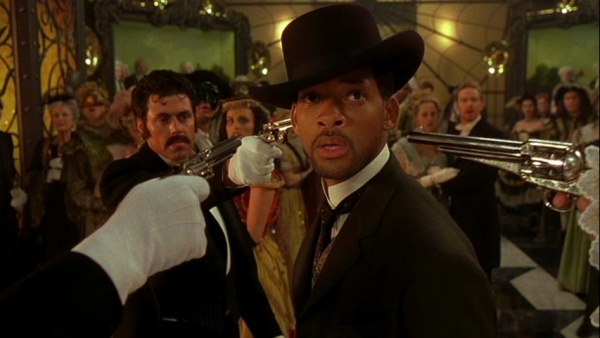 Artemus Gordon (Kevin Kline), despite his professed dislike for firearms, keeps a single-shot Colt Theur Derringer on a spring-loaded catch inside a belt buckle. West later slips it to him in Loveless's hideout, and Gordon conceals it on his wrist spring (appears to be a modified holdout device). The pistol is actually a modern reproduction known as the 4th Model Derringer, as opposed to the time period appropriate 3rd Model derringer and can be distinguished by its smaller .22 bore rather than the .41 bore of the original pistol. 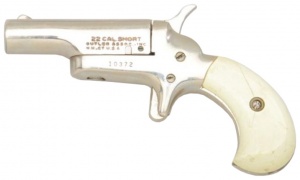 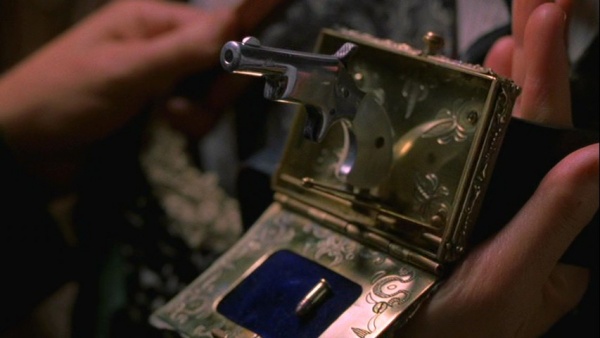 Gordon's belt buckle. Note the small size of the bore and the spare .22 Short cartridge. 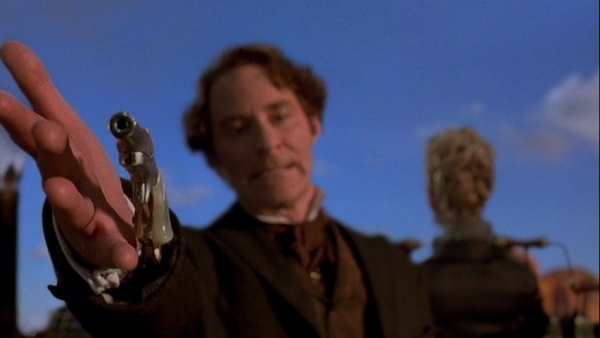 Gordon pulls the Derringer from a wrist mechanism.

Munitia (Musetta Vander) carries a nickel-plated Smith & Wesson Schofield Model 3 as her sidearm. One of the guests at Loveless' party also pulls one on Jim West 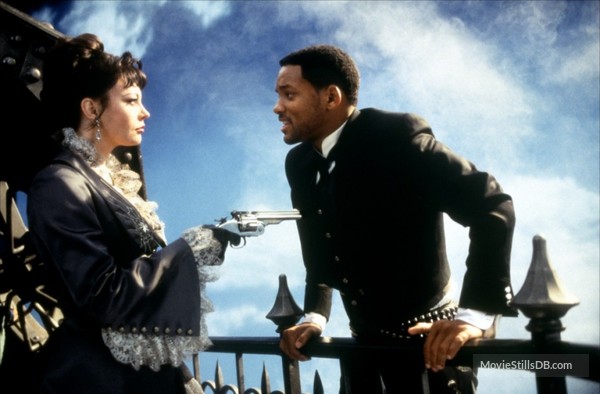 A publicity still of Munitia (Musetta Vander) holding her Model 3 to West's (Will Smith) chest. 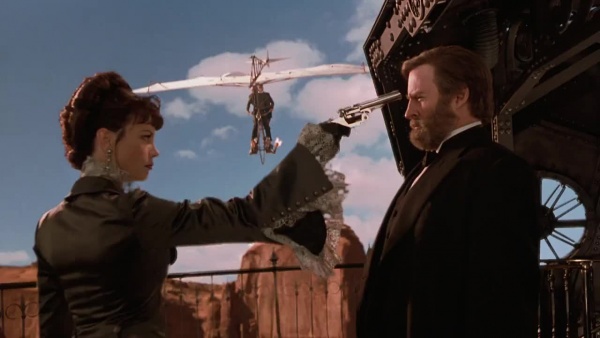 Munitia holds her Model 3 to President Grant's (Kevin Kline) head, seconds before she is knocked over the side by West and Gordon's glider.

The man behind Jim aims his Model 3.

An assassin hiding in a painting uses a Single Barreled Shotgun in a failed attempt to kill West. 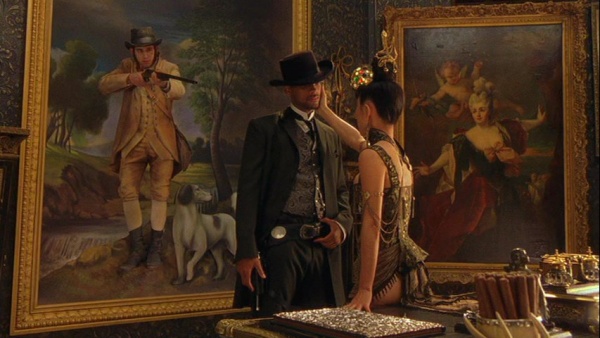 West removes a cut-down "Mare's Leg" style Winchester Model 1873 from the arms cache in The Wanderer and cocks it one-handed as he and Gordon ride to confront Loveless.

This is the screen-used Winchester 1873 cut-down "Mare's Leg" as seen on the panel wall in the film. 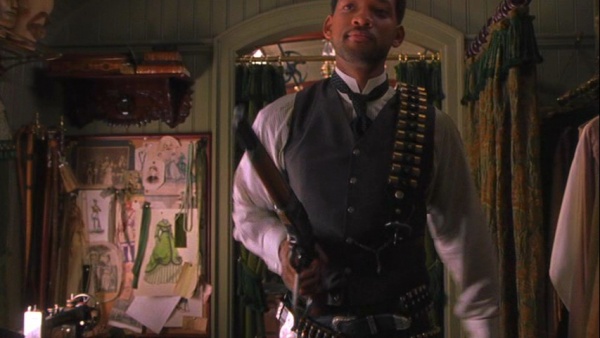 West cocks the Winchester Model 1873 one-handed. (You can tell it's a '73 rifle rather than an '87 shotgun because of a number of identifiers, the most noticeable of which are the shape of the receiver and the brass loading block seen from the bottom.) 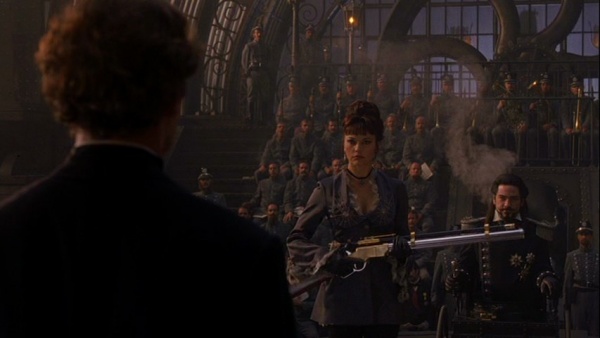 A Remington 1858 "Cattleman's Carbine" is seen in the cabinet aboard The Wanderer, and Amazonia (Frederique Van Der Wal) also carries one (equipped with a telescopic sight) aboard the Tarantula, before she is ordered at gunpoint to toss it over the side. 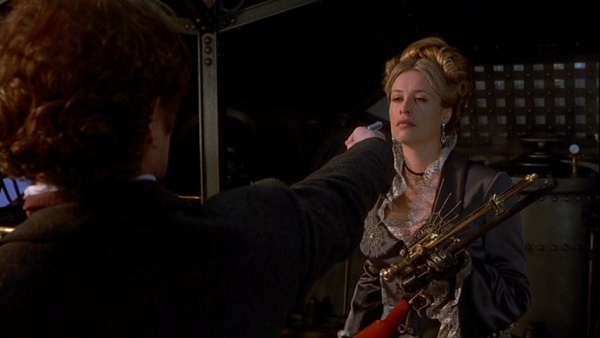 Amazonia with her Remington 1858, before tossing it over the side at Gordon's order. 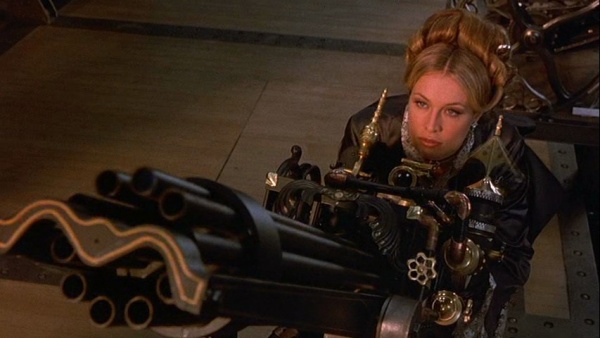 Aboard The Wanderer, Jim West opens a wall panel to reveal a cache of guns (need some ID'ing). 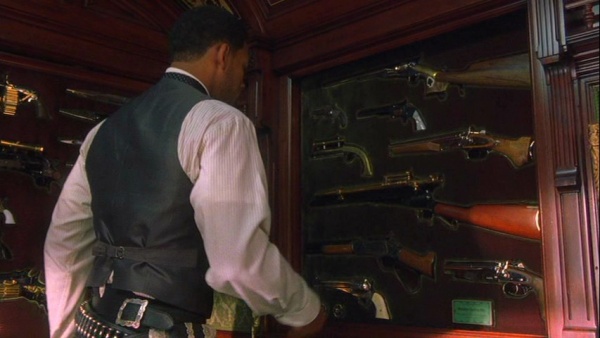 The other panel has some "steampunk" weapons, most of which are actual 19th century weapons (or custom, non-firing replicas) fixed up to look that way. Some of the guns are in their original configuration, but others are heavily modified which makes them difficult to identify.

Customized LeMat Revolver fitted with what appears to be a scope, an adjustable shoulder stock, and a brass attachment to the under barrel. - At the top, second one down from the bayonets.
Customized Lefaucheux Model 1858 Pinfire Revolver revolver with a gold-washed cylinder and fitted with a scope. - Below the LeMat.
Lefaucheux Model 1854 Pinfire Revolver fitted with what appears to be a fluted cylinder and mocked up to look like some kind of fictional steampunk gun. - Above the LeMat
Two Sharps Pepperbox Derringers, one with ivory grips. - Below the LeMat, to the right of the Lefaucheux.
Something slightly identical to the Joseph Lang Transitional Revolver (this one is probably a prop or some kind of toy). - Under the pepperboxes.
James Reid "My Friend" Knuckleduster Revolver - Under the Transitional Revolver
Pepperbox revolver - The first gun under the LeFaucheux.
Flintlock Pistol - The second gun under the Lefaucheux.
Stevens Lord Single Shot Pistol fitted with a strange prop cylinder-like attachment to look like some odd, fictional steampunk revolver-type contraption of a handgun. - To the left of the bayonets.

I can't identify the last one. I don't recognize it. I'll try, but anyone who can see good enough and can identify it, please do. 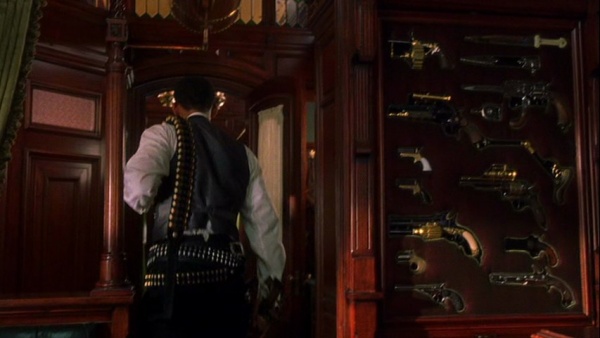 For self-defense, Dr. Arliss Loveless's (Kenneth Branagh) wheelchair is equipped with twin barrels at the front of the left arm and rear of the right arm, to deliver twin loads of double-aught buckshot. He uses the rear-facing guns to kill General McGrath (Ted Levine), and attempts to use the front-facing guns to shoot West. 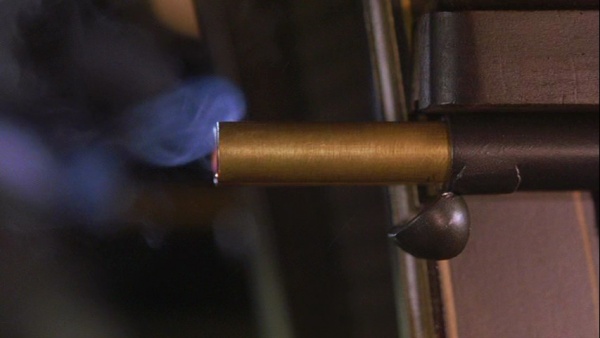 The rear-facing barrels pop out of the right arm of Loveless's wheelchair and fire. 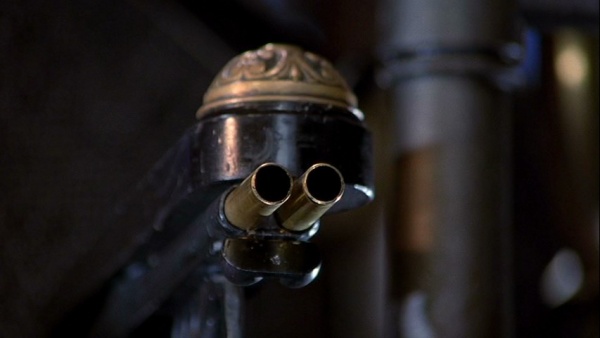 Shot of the front-facing barrels on the left arm.

The film takes place in 1869, which actually predates several of the firearms that appear in it, including: