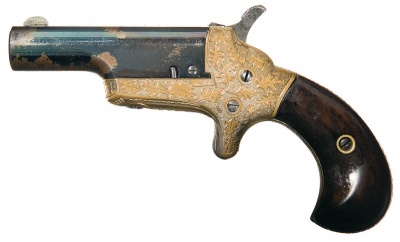 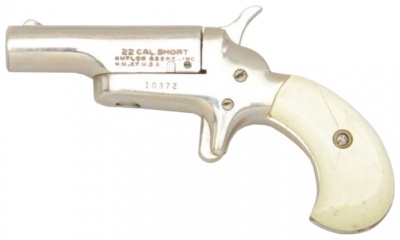 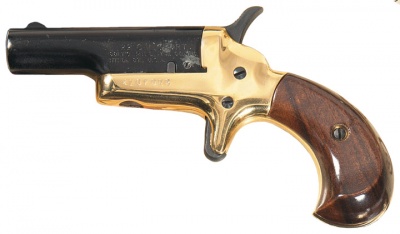 Officially know as the Colt 3rd Model Derringer this pistol is more commonly referred to as the Colt Thuer Derringer after the weapon's designer, Alexander Thuer. The pistol has a brass frame which was either bare or nickel plated and a nickel plated or blued steel barrel. Although production of the pistol ceased in 1912, the externally similar Colt 4th Model Derringer chambered in .22 Short was released in 1959. This pistol had a frame and barrel made from Zamak (a cheap zinc alloy) and as standard were nickel plated or with a black oxide coated barrel. The 4th Model Derringer was mainly for display purposes (due to the soft alloy barrel with no liner) and was also sold in "Lord & Lady" matching boxed pairs. The "Lord" had a gold plated frame, black oxide coated barrel and walnut grips, whilst the "Lady" had gold plating on both the frame and barrel and had faux pearl grips.