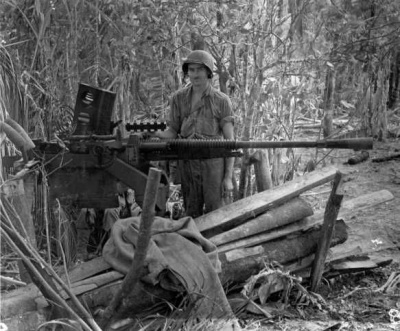 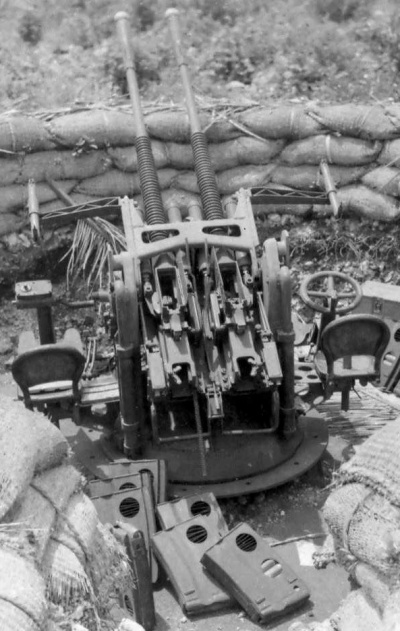 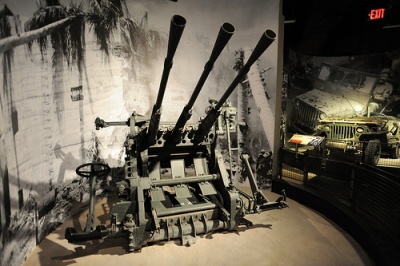 The Type 96 25 mm AT/AA Gun was a machine cannon, which was used by the Imperial Japanese Navy in World War II as an anti-aircraft gun. The designation type 96 means the year of the first development, the year Kōki 2596 or 1936 according to the Gregorian calendar. The weapon was an air-cooled gas operated loader, which shot with a theoretical firing sequence of 220 rounds per minute 25 mm bullets with a muzzle velocity of 900 meters per second.

After various problems with the water-cooled 40-mm Vickers QF 2-pounder naval guns became known, the Japanese Navy decided in 1935 to replace them with a gun based on the French 25 mm Hotchkiss AA gun. After studies on the weapon in France, some patterns were ordered with changes according to Japanese wishes at Hotchkiss. The weapon now reached with a 250 g (0,551 ib) heavy bullet a theoretical rate of fire of 180 to 200 rounds per minute. The Japanese made further changes and exchanged the muzzle-fire damper for a model based on a development by Rheinmetall and, to a lesser extent, the function of a muzzle brake. Furthermore, manufacturing was simplified by the use of castings in areas where previously forged parts had been used. The mass production of the weapon began after the trials in 1936 and the Type 96 was gradually introduced on all warships of the Imperial Japanese Navy as a standard weapon for air defense at close range. The weapon was mounted singly (1943), in groups of two (1936, first variant) or three (1941) on gun carriages.

The barrel was bolted to the gun and had to be replaced after about 6000 fired shots, as it was then worn down so that range and accuracy decreased rapidly. The change took about five minutes to complete. The gas pressure used to drive the cartridge reloading mechanism could be adjusted to change the number of grenades fired per minute. The theoretical firing order reached 200, 220 or 250 rounds per minute. The standard setting was 220. Due to the constantly necessary reloading of magazines, however, only around 110 rounds per minute were effectively achieved.

The recoil resulting from the firing of the projectiles was intercepted below the weapon via two hydraulic cylinders, each of which had a diameter of 6,7 cm and was about 43 cm long. The ammunition was supplied from about 7 kg (15,432 lb) steel magazines with 15 cartridges each, which were introduced vertically above the closure into the weapon. Empty cartridge cases were ejected on the underside of the weapon.

The Type 96 25 mm AT/AA Gun and variants can be seen in the following films, television series, video games, and anime used by the following actors: