The Tanegashima (種子島), also known as hinawajuu (火縄銃) or teppo (鉄砲), is a Japanese clone of a muzzleloading matchlock arquebus, introduced to Japan when 2 samples were purchased from Portuguese sailors on the Tanegashima island in 1543. Realizing the potential of the Portuguese weapon (it could be given to unskilled conscripts who could be trained to use it effectively in a matter of weeks, unlike the traditional Japanese bow or Yumi which took years to master), the Japanese copied it and swiftly began producing and deploying it en masse.

The Tanegashima was enthusiastically adopted by many Japanese warring factions of the period, and saw major use in the Sengoku Jidai (or Japanese Warring States) period and the Japanese invasion of Korea in 1592, before being superseded in the 19th century by more advanced firearms. As the Japanese did not export the weapon, it is most likely to appear in Japanese-produced media, or media that deals with historical Japan.

Like most antique firearms, any Tanegashima that is fired in a live-action work is almost certainly a prop or modern reproduction, due to the needless expense of procuring the genuine historical articles (most of which are now rare and expensive museum pieces) for such scenes.

Please check the talk page for additional variants not shown on the main page.

The Tanegashima and variants can be seen in the following films, television series, video games, and anime used by the following actors: 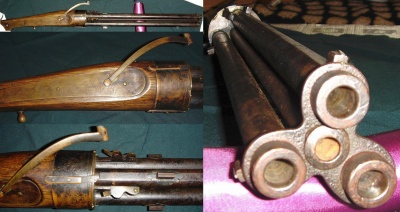 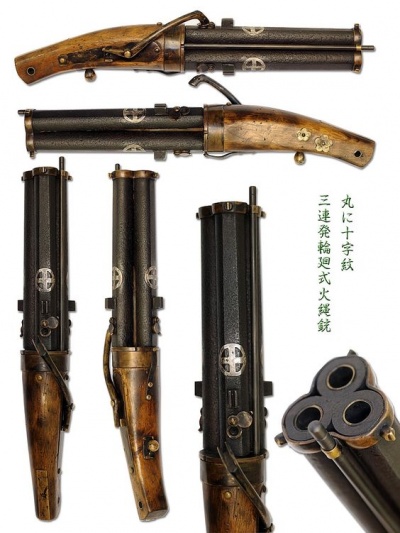 The Tanegashima Pepperbox is a very rare type of the medieval Japanese firearm. While hundreds of thousands of standard Tanegashima were produced, only a few dozen examples of the pepperbox are known. The standard type of Tanegashima pepperbox mates the matchlock gun with three manually revolving barrels with a single lock and hammer.

The Tanegashima Pepperbox and variants can be seen in the following films, television series, video games, and anime used by the following actors: