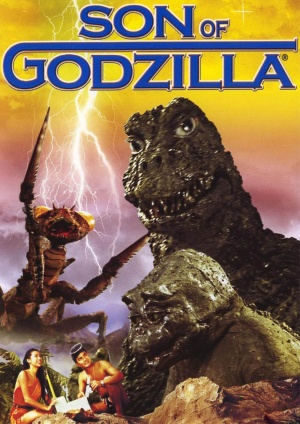 The following weapons were used in the film Son of Godzilla:

Nearly all of the characters use this lever action rifle that resembles a Marlin Model 336 throughout. Likely flash paper non-guns due to the kind of muzzle flash and the smoke they produce. They are used several times to engage Kamakuras, a giant praying mantis species living on the island.

Goro keeps his rifle up as he and Kusumi back into hiding.

Goro keeps his rifle on the passing mantis whilst motioning for Kusumi to stay put.

The scientists fire at Kamakuras.

The scientists fire at Kamakuras. Kamakuras is by far one of the weakest kaiju in the series, but he's still durable enough to survive small arms fire.
Retrieved from "https://www.imfdb.org/index.php?title=Son_of_Godzilla&oldid=796638"
Categories: