The Smith & Wesson 44 Hand Ejector Series and variants can be seen in the following films, television series, video games, and anime used by the following actors: 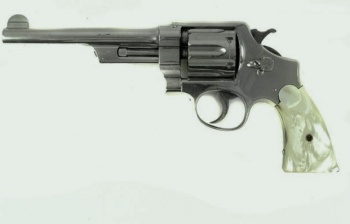 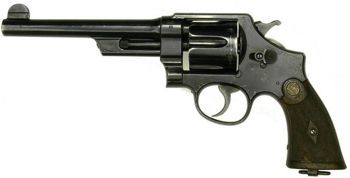 The first large framed Smith & Wesson Hand Ejector model. Now referred to as an N frame revolver, but for many decades was known as the 44 frame. The .44 S&W Special was developed in conjunction with the revolver. The 1st Model is called the Triple Lock due to the fact that it had three locks. The rear cylinder lock, the ejector rod lock and a frame mounted lock for the cylinder crane. It is identified by the ejector rod shroud. The Triple Lock was discontinued in 1915. See the Smith & Wesson Mk II Hand Ejector below for the reasons behind the design change. 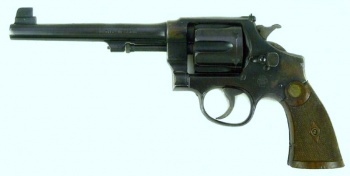 The 2nd Model began its manufacturing history as the British Smith & Wesson Mk II Hand Ejector. The cylinder crane lock and the ejector rod shroud was eliminated. It's often mistaken for the smaller Smith & Wesson Military & Police Model. Other than the elimination of the ejector rod shroud and the Triple Lock, it's mechanically identical to the 1st Model. The other engineering change of note is that in the 1920's S&W began heat treating the cylinders making the cylinders stronger and able to withstand more powerful loads.

A version of this revolver, modified to accept the .45 ACP round from the M1911 pistol was manufactured for the U.S. Military during WWI to supplement a (then) short supply of 1911 pistols, and was adopted and classified (Along with a similar Colt revolver) as the M1917 Revolver.

In 1926 Smith & Wesson reintroduced the ejector rod shroud due to a request from the Fort Worth, Texas gun-dealer Wolf and Klar. The Triple Lock design was not brought back due to cost and the realization that it wasn't actually necessary. The 3rd Model was manufactured simultaneously with the 2nd Model. The 3rd Model was special order only until 1940 when S&W listed it in the company catalog. Frequently mistaken for the 1st Model "Triple Lock". Only 4,976 were manufactured between 1926-1941. Listed here for reference purposes. 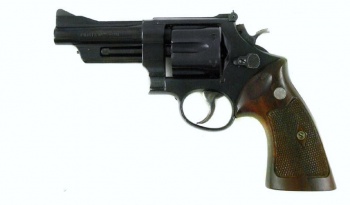 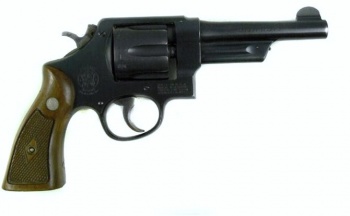 In 1950 Smith & Wesson resumed production of the .44 revolver with significant engineering changes. Most notable is the full rib running along the top of the barrel on the Target version and the new "Short Action" (introduced 47/48) with the shorter trigger arc and the redesigned hammer. See the earlier models for the difference. In 1957 S&W began numbering its models. The Model of 1950 Target changed to the Smith & Wesson Model 24 and the Model of 1950 Military became the Smith & Wesson Model 21. As is obvious it's very easy to mistake the .44 Model of 1950 for any number of S&W (Post-World War II) N Frames. However they are listed here since it is entirely plausible that in a movie or television production (especially a historical piece) one might find the characters specifically referring to any of the above listed models. 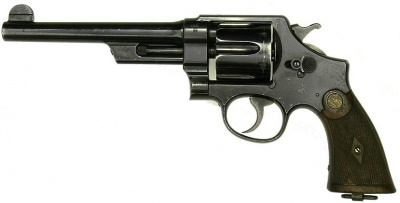 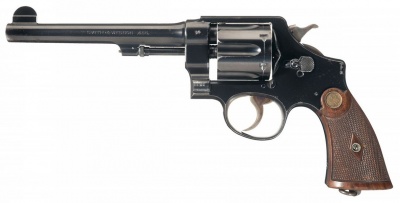 Between 1915-1918 S&W produced this particular model for the British government. The demands of WWI were so great that Webley could not make enough of the Webley Mk VI revolver. So both Colt and S&W produced revolvers chambered for the .455 Eley. The British liked the S&W Mk.I revolver, but reported that mud (a constant companion for the soldiers in the trenches of France) would get into the ejector rod shroud and make it difficult to close the cylinder. Similar reports were made about the cylinder crane lock - the third lock. It was decided that neither were necessary. So for economical and battlefield reasons S&W did away with the shroud and the cylinder crane lock. The redesigned model was called the MkII and would also be made as the M1917 Revolver to the United States military, chambered for the .45ACP cartridge from the M1911 pistol.

The Smith & Wesson Mk II Hand Ejector has been used in the following films: