Dan Wesson Firearms was founded in 1968 by Daniel B. Wesson II, who worked at Smith & Wesson from 1938 until 1963, and strictly controlled production quality. After the purchase of Smith & Wesson by the Bangor-Punta, Wesson set out to open his own manufacturing operation in order to produce high quality, American made revolvers for service as well as competition use. Dan Wesson Arms was incorporated in 1968, with its headquarters and production located in a former school building in Monson, Massachusetts.

Dan Wesson's unique double action revolver design was invented by Karl R. Lewis, who was also the designer of the M79 grenade launcher as well as the Colt Trooper revolver. Lewis's innovative idea for barrels and monogrips that could easily be changed by the firearm's owner with simple hand tools quickly became popular with shooters. Lewis' idea was to house the barrel within a separate shroud secured by a nut at the muzzle, which places tension on the barrel and provides support at both ends of the barrel. By unscrewing the muzzle nut, the shroud and barrel could be removed and replaced with different barrel lengths and shroud configurations. The fact that the barrel is supported and placed under tension at both ends (along with the ability to fine-tune barrel-cylinder gap) resulted in markedly increased accuracy over conventional revolver designs. Because of this design, many revolvers shipped from the factory with several different interchangeable barrels, and complete sets are worth a premium to revolver collectors. Another distinctive feature of the Dan Wesson revolver is their cylinder latch, located on the firearm's crane, ahead of the cylinder. This allowed more structural integrity to remain on the revolver's sideplate, thus making the action stronger.

After the death of Dan Wesson II, the company continued to be managed by Wesson's son, Seth, but financial issues eventually led to bankruptcy. Despite Dan Wesson's death and financial issues, the company continued to branch out to producing rifles, designing ammunition, as well as a popular line of Dan Wesson 1911 semi automatics in various calibers. The company changed hands and locations several times, and was eventually moved from Massachusetts to New York, where it remains. Currently the company is owned by CZ-USA and the company's focus has shifted from revolvers to 1911s, with the only revolver still being made by the company being the 715 HV6. 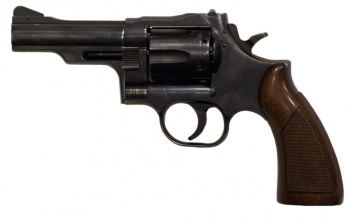 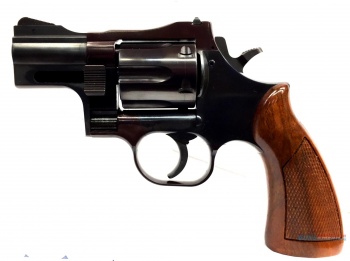 The Model 14 is very similar to the Model 15, only it had fixed sights. The Model 14 was a relatively obscure model and was not produced in large quantities from 1974 to 1981. The first revolvers the company made that were the precursors to the model 14, the Model 12 and 13, were produced in even smaller numbers from 1969 to 1974.

The Model 15 is very similar to the Model 14, only it had adjustable sights. The Model 15 was one of Dan Wesson's flagship models, produced in great numbers from 1971 to 1992. 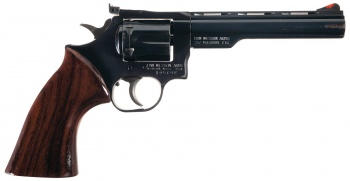 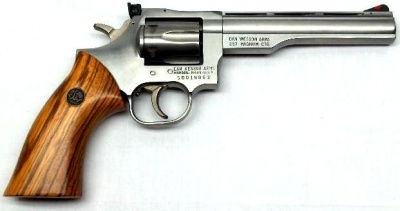 The Model 715 is the stainless version of the Model 15. It was one of the company's most famous models and is currently the only revolver still manufactured by the company, with its VH-6 barrel, the 6 inch-long barrel with a heavy vent shroud. It was produced from 1982 to 2006, and manufacturing began again in 2016 after a ten-year hiatus and continues to this day. 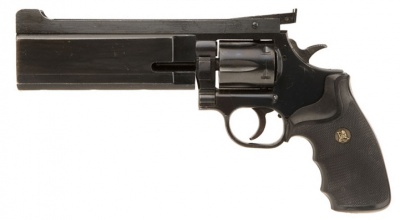 On paper, the Supermags looked great, as they could fire both the magnum and special counterparts of their super magnum cartridges. The Supermags proved to be unsuccessful, however, as the proprietary rounds were both expensive and impractical, and the guns large and also expensive. The .375 Super Mag was perhaps the least successful, as it was meant to fit between the .357 and the .414, but it used a relatively obscure bullet size and had a tapered case that was prone to sticking in the cylinder after firing. The .41 Magnum was already a flop, so a .410-caliber super magnum was not on anyone's minds, and the .445 would soon after be eclipsed in power by the .454 Casull, which would be added to the SAAMI. The only Supermag that was remotely successful was the .357 Maximum, and that was probably only because other firearms manufacturers were already making guns in that caliber. And even then, the .357 Maximum would ultimately fade into obscurity. The Supermags are popular now with firearms enthusiasts, hunters and reloaders, but at the time were too ambitious and not enough to save the company's failing product line.