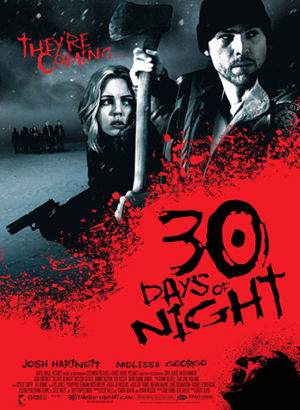 30 Days of Night is a 2007 horror film directed by David Slade, starring Josh Hartnett and Melissa George. It is an adaptation of the comic book miniseries of the same name.

In Barrow, Alaska, the northernmost town of the United States, most residents have left in anticipation of the annual month-long polar night that will leave the town in 30 days of continuous darkness. Soon after sunset falls, the town is cut off from the outside world and attacked by a band of vampires who have come to feed without fear of the sun.

The following weapons were used in the film 30 Days of Night:

Sheriff Eben Oleson (Josh Hartnett) carries a Beretta 92FS as his issued sidearm in the film and uses it until he loses it when the vampires flip over his van.

Oleson makes a dark discovery while holding his Beretta 92FS.

Oleson fires his Beretta 92FS through the roof of the car at an attacking vampire.

Oleson with his Beretta 92FS.

Stella Oleson (Melissa George) carries a Glock 21 2nd Generation as her sidearm of choice and pulls it on The Stranger (Ben Foster) that shows up in town as he threatens Sheriff Eben. As she is a Fire Marshal, it can be assumed it is her duty sidearm. 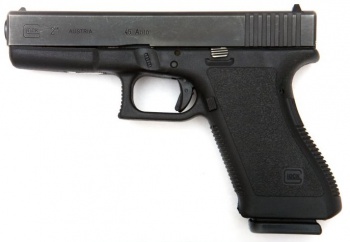 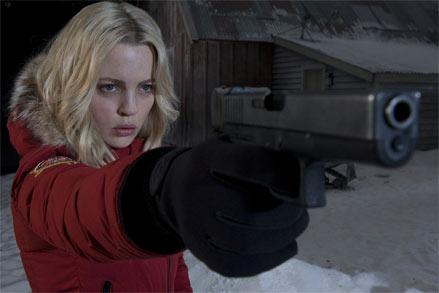 Stella holds her Glock 21 on The Stranger when he tries to attack Eben. Note how the barrel end in the ejection port has been shaved down, meaning the gun has been blank adapted.

Stella searches the police station with her Glock 21 at the ready.

A Dan Wesson Model 15 stainless snubnose revolver is carried by Stella Oleson (Melissa George) and later by Sheriff Eben Oleson (Josh Hartnett) in parts of the movie. It is identifiable as a Dan Wesson because of its unique cylinder release. 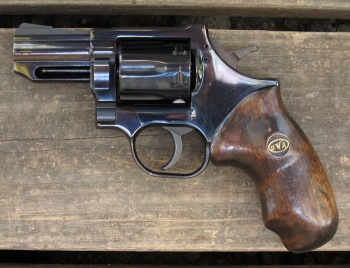 The snubnose gets knocked out of Eben's hand.

Note how the gun appears to be empty, but you wouldn't be able to see rounds, or the absence of rounds, due to the flared backplate on the Dan Wesson that completely covers the rear of the cylinder.

Peter Toomey (Jack Walley) fires a few shots from his Smith & Wesson Model 13 revolver at vampires to no avail as they attack his wife, only to be killed himself by Marlow (Danny Huston), the vampires' leader. 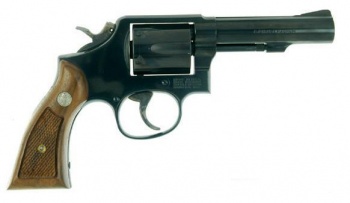 Close up on the smoking barrel of Toomey's Smith & Wesson Model 13.

Toomey with his Model 13.

A Hatsan Escort Marine Guard Shotgun is carried and used by Sheriff Eben Oleson (Josh Hartnett) and later used by Beau Brower (Mark Boone Junior). Hatsan Arms is a Turkish company that produces the Escort shotgun line. Due to it being a marine model, it has a stainless finish.

A town member fires the pump shotgun at the attacking vampires.

Beau (Mark Boone Junior) pumps and fires the shotgun while driving the backhoe with a trencher attached to the front loader.

Beau (Mark Boone Junior) tries to hold back the vampires with the Hatsan Escort Marine Guard.

Sheriff Eben Oleson (Josh Hartnett) is seen using a Mossberg 500 shotgun with an extended magazine tube when he searches the police station. One of the town members is seen using one too.

Sheriff Eben Oleson (Josh Hartnett) searches the police station with his Mossberg 500 at the ready.

A town member fires a Mossberg 500 at the vampires.

John Riis (Peter Feeney) has an Over/Under Shotgun ready to go on his coffee table when a vampire comes through his kitchen window and attacks his wife. He chases the vampire outside to save his wife, but is too slow to catch it.

Riis keeps his O/U shotgun on his coffee table.

Riis tries to fire his O/U shotgun under his house at the vampire. Keeping both fingers on both triggers is a bad idea when shooting double trigger guns, as the recoil can cause you to pull both triggers, resulting in a "double-kick", which is quite unpleasant.
Retrieved from "https://www.imfdb.org/index.php?title=30_Days_of_Night&oldid=1423389"
Categories: