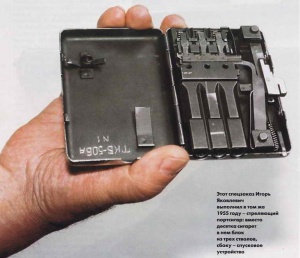 Assassination Devices are usually clandestine firearms disguised as a non-weapon to conceal their true purpose and are used by assassins, secret agents, spies, terrorists, etc. Occasionally used by intelligence agencies or spy services of all kinds and from various governments during the World Wars and the Cold War, many have been found in different forms such as pens, cigarette lighters, cameras, mobile phones, key fobs and are often seen in spy or crime movies or similar media. It must be noted that many are hard to identify or are props.

Note: This page exists to list all the disguised firearms that are made out of, or hidden within other innocuous items that have appeared in films, television shows, anime or video games. It is not a place for other weapons (such as darts, or hidden knives, or daggers, or garottes). It is also not the place for firearms that are exceedingly small or just easily concealed, such as Derringers or micro-pistols, since under most circumstances their purpose as a firearm is still quite apparent. Only firearms whose true nature has been deliberately disguised, usually by concealment within another object built around it or by being assembled from innocuous-looking parts, should be listed on this page.

For example, a Derringer designed to be quickly retracted up a sleeve on a special mechanism would not count as an assassination device since it was not disguised within an innocuous-looking object purposely built around it nor was it assembled from several innocuous looking parts, but the "Thermos Gun" of Alien: Resurrection would.

When referring to crude, makeshift firearms made from materials on hand (that can actually fire in real life) consider the Zip Gun page for those types of firearms.