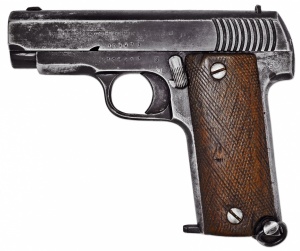 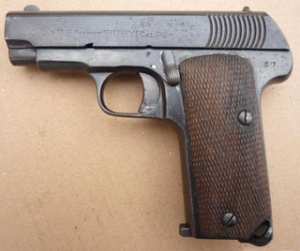 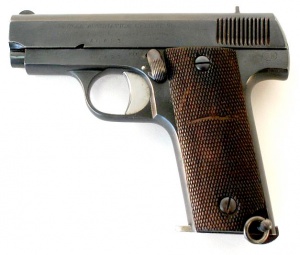 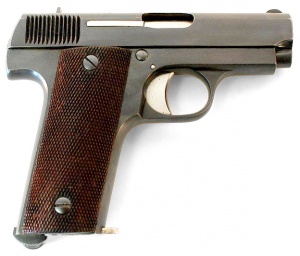 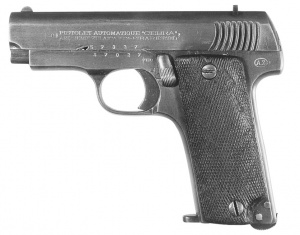 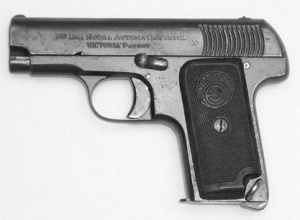 The Ruby pistol, also known as the Eibar-type pistol, was a type of pistol first developed in Spain by Spanish firm Gabilondo y Urresti (later Llama) in 1914, heavily based on the Browning Model 1903. It was adopted by the French Army in World War 1 as Pistolet Automatique de 7 millimètre 65 genre Ruby. From 1915-1918, Gabilondo mass-produced Ruby Pistols for the French military. The Ruby was issued to telephonists, stretcher bearers, Chauchat (machine gun) gunners along with loaders, 37mm mortar crews, and tank crews. It served in the French military until the 1930s (longer still in colonies like Indochina and Algeria). Ruby pistols were also supplied to Italy, Russia, Greece and Serbia, and after WW1 to Poland and Finland (from French stocks).

When Gabilondo was unable to keep up with the French demand for pistols, they subcontracted the contract to other production shops in Spain, who in turn subcontracted those to other even smaller workshops. This meant that the Ruby was produced by large amounts of manufacturers (about fifty) under a large amount of trade names, like Cebra, Liberty, Destroyer, et cetera. This caused issues with part interchangeability, but the French Military needed a lot of small arms fast, and therefore were in no position to argue this point.

The Ruby Pistol and variants can be seen in the following films, television series, video games, and anime used by the following actors:

The UNION pistol is a trade name used by French, Spanish, and American companies for a clone of the Ruby, first made in 1925. They came under a variety of specifications, with versions coming in different calibers (generally .32 ACP, some in .25 ACP and some 7.65×20mm Longue models used for French military trials), capacities, barrel lengths, and some even having select-fire capabilities.

Perhaps one of the more famous attributes of the pistol is a 35-round horseshoe-shaped magazine patented for the gun in 1930 in France. French UNION makers were experimenting with large magazines for the machine pistol version, and the straight magazines they came up with ended up being too large to easily use, so the magazine was wrapped around to the front of the gun.

The UNION pistol appears in the following movies, TV shows, and video games: