The QCW-05 and variants can be seen in the following films, television series, video games, and anime used by the following actors:

The QCW-05, known as Type 05 Submachine Gun in Chinese, is a Chinese bullpup submachine gun. The weapon is manufactured by China South Industries Group Corporation (CSGC, a.k.a. China Ordnance Equipment Group Corporation), and was designed by Jianshe Industry (Group) Corporation, a subsidiary of CSGC. 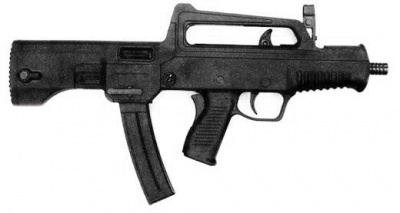 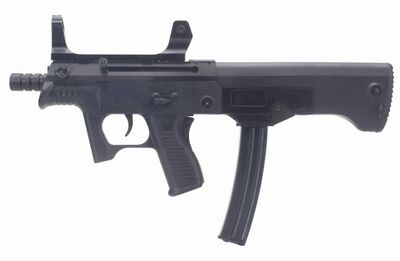 A smaller version of the QCW-05 for police and export chambered in 9x19mm NATO and utilizes MP5-type magazines. Officially designated CS/LS2, but better known under the unofficial nickname given to the weapon during development, JS 9mm, which was a shorthand for "Jianshe 9mm submachine gun", Jianshe being the weapon's designer. The CS/LS2 fires from an open bolt with a reciprocating bolt handle.

Noticeable differences include removing the carrying handle, moving the charging handle to the side of the weapon (with ambidextrous options), adding a rail to the top of the weapon, and using original QBZ-95 styled trigger guards.

There are two in-dev sample guns shown by Jianshe during development, sample gun 1 (a.k.a JS1) was shown on Jianshe's product manual, while sample gun 2 (a.k.a. JS2) was first shown in 2005 on a Chinese police equipment expo. Sample gun 2 is similar to the production weapon, but has the selector switch on the right hand side and does not have ambidextrous charging handle options, being right-side only.