Before you do any editing please take the time to read the Rules, Standards and Principles. This is a very important document that explains how this website is setup as well as telling you what is and isn't allowed. If it is determined by an admin that you have not read these rules, your account will be suspended. Continued non-compliance may result in a permanent ban. After that you should also read the IMFDB Screencapping Guide and the IMFDB Style Guide to familiarize yourself with the image and formatting requirements for pages you create.

Finally, IMFDB has a forum set up here that is only available to registered members. There is lots of good stuff to see there. If you would like to join the forum, please post HERE and an account will be created for you.

Hello, Slon95! Many thanks for creationg Russian language films. I'm also user from Russia. If you want, you may e-mail me, and we can speck in Russian. Pyramid Silent (talk) 11:01, 2 October 2015 (EDT)

I think, page NecroVisioN ready. In the game there a "vampiric weapons," but I think it makes no sense to describe it, because they do not have real prototypes. NecroVisioN: Lost Company is also almost ready - there were, I think to add screenshots of weapons, which can be obtained only through cheats (as Colt M1911). --Slon95 (talk) 21:54, 25 June 2015 (UTC+2)

Hello, Slon95! I'm sorry, I have some question: is the character with RPG-7 in To Survive (Chtoby vyzhit) named Sergei? According actors credites, thats had never characters with this name. Pyramid Silent (talk) 10:06, 8 December 2015 (EST)

Thanks for Chtoby vyzhit page! I had the idea of working on this movie for a long time but my VHS copy was too poor. Greg-Z (talk)

I need help to ID the firearms in my new page 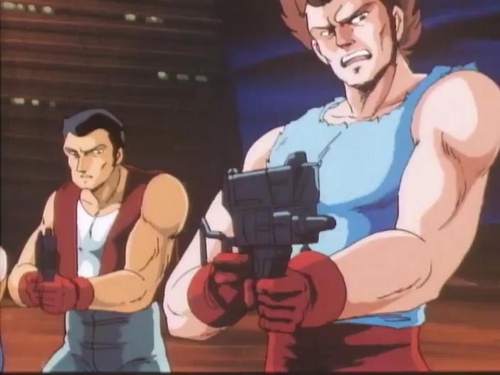 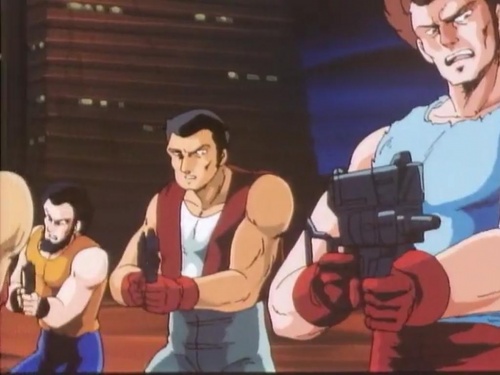 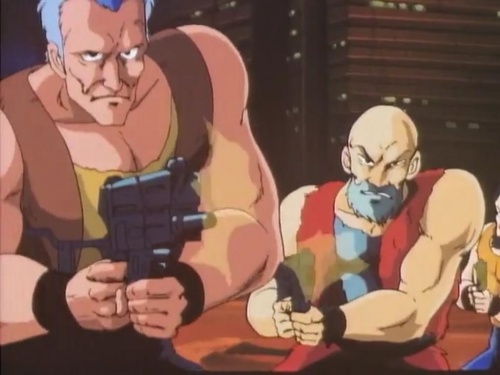 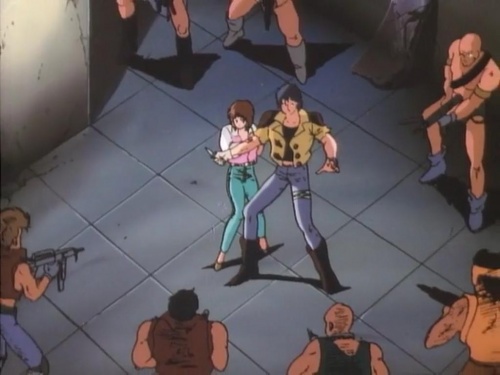 SMG with carrying handle at the left. 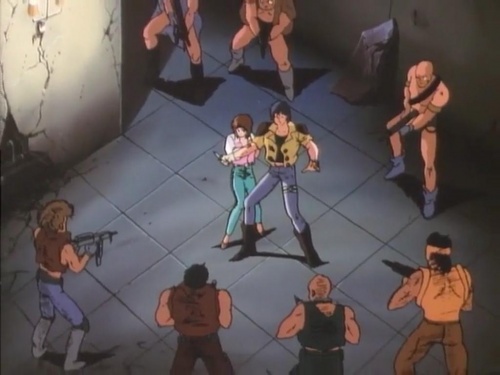 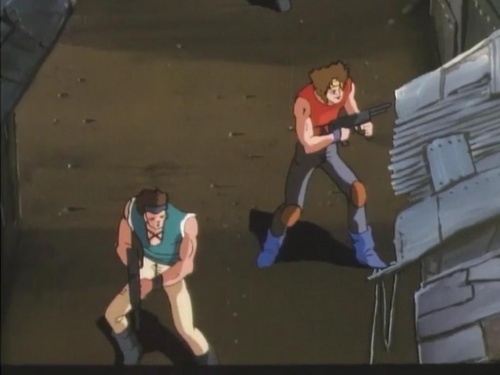 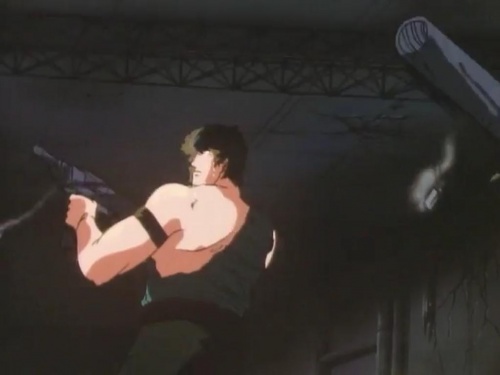 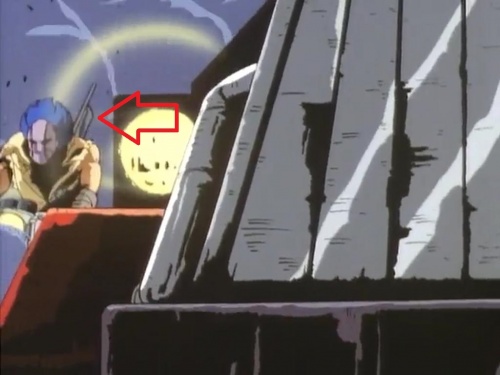 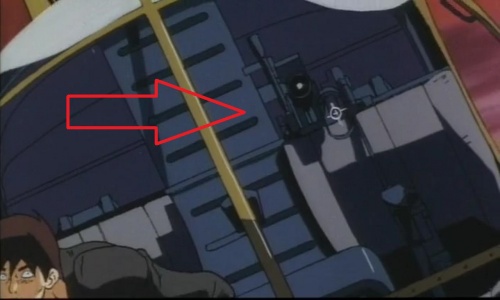 (mounted on the helicopter)

Hello, Slon95! I'm sorry, I have some question. I didn't watched movie Dorogoy malchik, so, I didn't know what meaning of the word "Dorogoy" was used. If it's means "high price" or "high cost", the title is more correct Expensive Boy, if it means "darling", the title Dear Boy is correct. Pyramid Silent (talk) 11:47, 24 April 2016 (EDT)

The images for Rafferty that you uploaded over the existing ones are twice as large but they are rather blurry. I don't think that it's a good substitution. Anyway, it would be better to have all screenshots from a single source, not as it is now. So if you are sure that the new images are better, please upload all of them in such quality. Thanks. Greg-Z (talk) 03:35, 4 June 2016 (EDT)

As it seems to me, In Search for Captain Grant is more correct English title. Also En Wiki prefers this version. Of course, I do not insist. Greg-Z (talk) 16:22, 3 December 2016 (EST)

Hello, Slon95! I had found Russian site with a lot of useful in formation about this film: near all actors creits with characters protos. Pyramid Silent (talk) 11:44, 5 December 2016 (EST)

It seems to me that your first identification of McNabbs' carbine as Spanish was correct. The screen gun lacks a groove on the stock that exists on Serbian carbine. Greg-Z (talk) 13:48, 5 December 2016 (EST)

Hello, Slon95! Thanks for upload correct photo to Truckers page. Also, how do you think, may this revolver be using in #SELFIEPARTY? Or it's original Colt King Cobra? Thanks. Pyramid Silent (talk) 11:10, 20 March 2017 (EDT)

Vetterli in Holmes and Watson

I strongly doubt that Moran's rifle is Bannerman Vetterli. Most likely it is the receiver of standard military Vetterli, combined with the barrel of Winchester 1892 or 1894, or even custom build of two tubes in Winchester style. The gun isn't firing on screen so there wasn't any problem to build a custop prop. Greg-Z (talk) 05:46, 3 October 2017 (EDT)

Too subtle work for the Soviet film (especially, why should it all at all?). There were many rare little-known versions of Veterli, including sporting models and stuff, and even a lever-action M68 carbine. -Slon95 (talk) 08:29, 3 October 2017 (EDT)

Not too subtle, if we'll look on various movie props, like "spy rifle" in "Perekhvat". But if we'll take Vetterli sporter as base weapon, then I'm puzzled by a reason of adding the Winchester-style magazine tube. It armourer took the barrel with magazine tube and attach it as a single part, it is explanable. But adding additional tube under the barrel of sporter rifle... And the screen gun represents fictional air rifle, so it can have any outlook. OK, it's hard to find the truth. Greg-Z (talk) 09:40, 3 October 2017 (EDT)

I revised this episode. This is almost certainly a professional conversion, and not just some kind of non-working fake.
Simply put, this is a rare variety of sportized Vetterli. Most of them, as a rule, had shortened magazines ([1]); but some (very few), on the contrary, received new steel extended tubes (instead of the standard hidden brass ones) [2]. -Slon95 (talk) 10:10, 3 October 2017 (EDT)

Thanks for clarification with fake Carcano carbines! I missed the Mosin magazine and the shape of the stock, looking only on folding bayonet. Greg-Z (talk) 02:26, 1 November 2017 (EDT)

Help with "All That Is Tender (Tot, kto nezhnee)"

Help with "The Wild East"

Hello, Slon95! I'm thank you for the help with construction the page The Wild East! I guess, you also watched this movie? If you watched it, how do you think, what's the language was spoken by Mongol: Mongolian or Kazakh? Pyramid Silent (talk) 15:53, 5 June 2018 (EDT)

Help to ID the rifle in the movie

Is this image still photoshopped?

Hello Slon95. This image of a Thompson is currently captioned "Photoshopped Thompson M1A1 with vertical foregrip and Cutts compensator - .45 ACP" on the talk page of Thompson Submachine Gun. You originally added this image with the caption on 2 September 2015. However, when you placed the image it was an old version; you updated it to a newer version one month later on 3 October 2015. "Much higher quality version. Better represents the weapon." So I want to ask you is this new version of the image still photoshopped? Because when it is used on pages like Borsalino or Fantômas se déchaîne, it doesn't have the Photoshopped marking. --Wuzh (talk) 14:46, 1 December 2018 (EST)

Where are you getting this idea that Avtomat magazines weren't hand-fitted to individual guns? They were still doing that in WW2 with PPSh-41 drums, and it was incredibly common for guns at the time to require extensive hand-fitting. With Chauchats you often couldn't even swap operating components between them. Evil Tim (talk) 13:45, 4 April 2019 (EDT)

Of course, I understand that Wikipedia is the most reliable source in the universe. Although it has already been discussed in detail here: [3] . And the manual installed magazines were a specific problem of M1919, which had nothing to do with WWI, and which was removed with the transition to M1923. And it's fun to hear that you think that each PPSh was going with only one magazine (apparently, for reloading it round-to-round for about an hour later). As far as I know, at least 4 drums were initially issued to each of them. --Slon95 (talk) 14:11, 4 April 2019 (EDT)

All the rifles issued in WW1 were hand-finished prototypes. And seriously, you're complaining about Wikipedia (as if that's the only place in the world that has this information) and your counter is...a forum thread? Where someone confronts you with the invincible proof of "well I say it's not like that?" Evil Tim (talk) 14:16, 4 April 2019 (EDT)

Currently we have this gun in three films (and I'm in doubt about Luch Smerti, too low quality to be sure). I personally hesitate in creating entry for this gun. But if create, then I would put it as a sub-entry for Mauser 71 which is in turn a part of Mauser Rifle Series. --Greg-Z (talk) 05:08, 17 June 2019 (EDT)

Your edit in Koroli i kapusta claims that SAA revolvers appear in Dovzhenko studio films. I wonder what films do you mean? Mustang-inokhodets is Kievnauchfilm production, and they very likely had their own prop store. As for a single SAA in Trevozhnaya molodost, it was filmed in 1955, more than 20 years passed before Koroli i kapusta. So I'm not sure that this trivia is correct. Or I missed some Dovzhenko film with Colts? --Greg-Z (talk) 12:58, 20 July 2019 (EDT)

I had found some information about actors of this movie, so, I add some details on disscussion page. Pyramid Silent (talk) 14:40, 11 October 2019 (EDT)

I noticed that you reverted my edit on the Desert Punk page. I understand that it's not a perfect match for the Schwarzlose, but I still think that it's a major source of influence. Take a look: 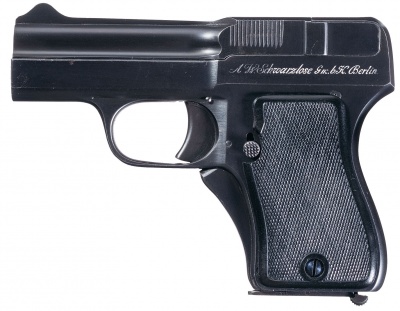 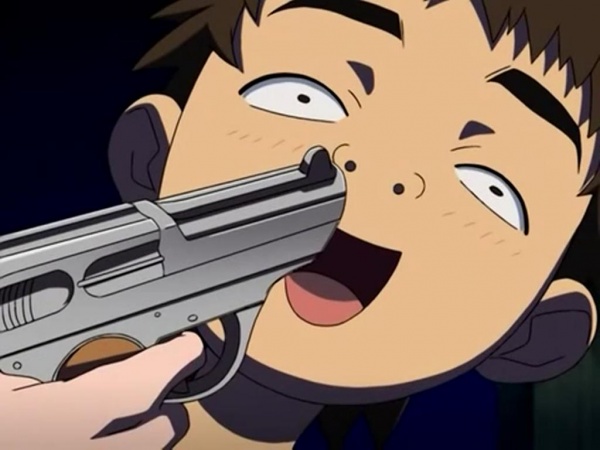 Note the thin rib on top of the barrel, a distinctive feature of the Schwarzlose. 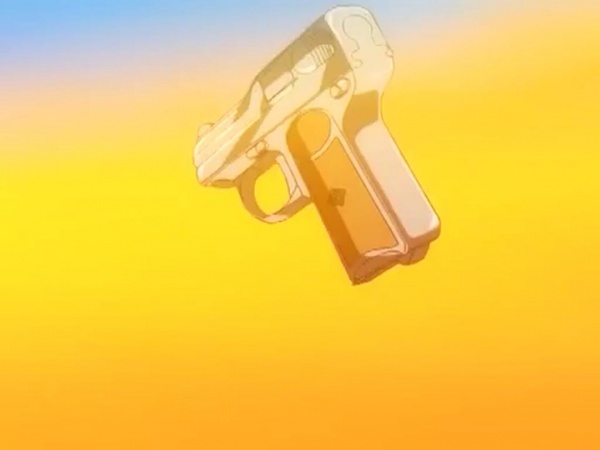 Here, the influence is pretty obvious; it looks a bit like they looked at a side-on view of a Schwarzlose and didn't understand how it worked, so they assumed that the fixed breechblock was a reciprocating slide.

At any rate, it's not exactly a Schwarzlose or an FN; it has some features from the FN, like the safety and grips, but the general profile is a better match for the Schwarzlose. Maybe we could call it a hybrid? BrandonColeford1992 (talk) 17:45, 23 October 2019 (EDT)

The "No. 1" and "No. 2" Mauser C78 revolvers that you've separated are actually the exact same type of gun; the "hammerless" one is just broken. The auction house that that photo is from specifically mentions the missing hammer, and the fact that you can see clean through one of the pin holes is a pretty clear sign regardless. There was more than one variant of the C78 (both a solid-frame version and a bottom-breaker were available at different points), but there was never a hammerless model. Pyr0m4n14c (talk) 16:52, 25 November 2019 (EST)

You posted this image and some information about this obscure 1982 Soviet pump-action shotgun made by Alexander Marchenko on the Main page's discussion page a while back. Can you tell me a bit more about where you found information about this? I couldn't find any info about this shotgun anywhere else.--Wuzh (talk) 07:18, 8 August 2020 (EDT)

So this talk is about the note you added on the PP-91 Kedr page. I'm going to say up front that I wish to apologize for the rather brash tone of my edit summary. With that out of the way, let's discuss the issue in a more calm and rational manner. This is what the note currently says:

(20 and 30-round also aviable, but not welcome for use without plug, in terms of legislation)

If you answer these two questions, and maybe elaborate a little bit more, I can help you fix the grammar in this sentence. --Wuzh (talk) 10:09, 12 September 2020 (EDT)

So I'm kinda intrigued by this statement that you added to the Thompson page in the Thompson M1919 section (in this edit):

"The "WWI-myth" itself stems from the 1921 confiscation of a M1921 batch destined for RIA from the New York docks."

There's a few things that I'm not sure about this. (Is "RIA" Rock Island Arsenal? How did a shipment of guns cause a myth?) Do you have the source where you took this statement from? I want to read more about it. --Wuzh (talk) 11:19, 8 September 2021 (EDT)

This has already been discussed on reddit, for example. RIA is the Republican Irish Army, one of the first major buyers of Thompson (although initially only three were delivered due to these events). And given that in 1918 there were only two worked Thompsons in the whole world (more precisely, one - M1917 was prone to jamming), it is not difficult to calculate this. --Slon95 (talk) 11:27, 8 September 2021 (EDT)