#SELFIEPARTY (Ukrainian title is original latin: #SelfieParty) is a Ukrainian 2016 comedy, directed by Lubomyr Levytskyi (Shtolnya, Unforgotten Shadows, Pawnshop (Lombard)). The group of former students organise the party with a large alcohol drinking. After that, they found themself in a police station: police find a dead body in they house. Now, they must remember all events of they party to avoid the trial and prison.

PC Correct film title is #SELFIEPARTY or #SelfieParty, which the page title could not use for technical reasons

The following weapons were used in the film #SELFIEPARTY:

Several policemen carry Makarov PM pistols in holsters. Policeman 2 (Mykola Bereza) briefly draws it. All of these pistols may actually be Viy pistols, a Ukrainian designed and produced rubber firing variant of the Makarov PM In fact, sidearms of the Ukrainian police is the Fort-12 and Fort-17. 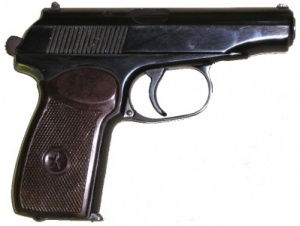 Policeman with the holstered pistol.

Good view of the slide.

Police detective (Istan Rozumny) carry EKOL Viper in the holster as his duty sidearm, but had never draws it. Policeman 1 (Pavlo Li) and Policeman 2 (Mykola Bereza) also carry similar sidearms and uses it many times. This revolver are briefly appers in the hands of several cyvilians. 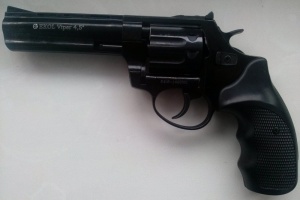 Policeman 1 (Pavlo Li) hands his revolver to study the self defence against firearms.

Good view of the gun.

Policeman 1 (Pavlo Li) with the revolver.

Note the very small caliber of the chambers.

The Neighbor (Roman Skorovskiy) uses IZh-27 when he tries to calm down drunkers. Robert (Boris Savenko) tooked it from him.