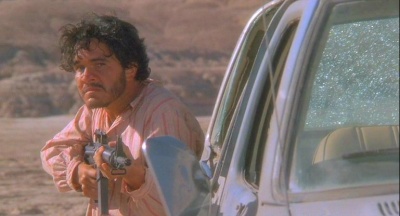 Thomas Rosales Jr. as Scarza with an M16A1 in Extreme Prejudice.

Thomas Rosales Jr. is a Hispanic professional stunt performer / actor who routinely plays unnamed and often-killed thugs in action films and television series. Like fellow stunt performers Carl Ciarfalio, Henry Kingi and Robert Apisa, Thomas has become one of those familiar faces which everyone recognizes, even if they don't recall his name.