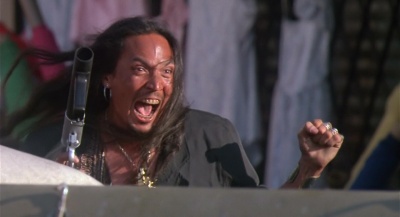 Henry Kingi as the drug kingpin, 'El Scorpio', reacting after blowing up a police car with his DefTech 1315 37mm Launcher in Predator 2.

Henry Kingi has been a professional stunt performer/actor since the 1970's and often plays thugs and killers in motion pictures. Though commonly cast as a Hispanic character, Kingi is actually a Cherokee/African /Caucasian mix. He was also once married to actress Lindsey Wagner, who played the original Bionic Woman. His sons Henry Kingi Jr. and Dorian Kingi have followed in their father's footsteps and are also stuntmen.