The game takes place within a huge (roughly 10 miles by 6 miles) 3D rendered area of central Los Angeles, roughly from Beverly Drive to Central Ave (horizontally), and from Mulholland Drive to National Blvd (vertically). A game map is included in the box for reference. Though the buildings and their placement within the world are quite generic, and highways/overpasses have been mostly removed, the streets and their layout are largely accurate. The game also includes some LA landmarks, such as Dodger Stadium, Griffith Park, and the Silver Lake Reservoir.

It is also the only game adaptation of the movie in which you can choose whether to play as Kyle Reese (default choice in other game adaptations) or the T-800 Terminator.

The following weapons appear in the video game The Terminator:

The T-800 Terminator's signature AMT Hardballer Longslide, while not appearing as an in-game weapon, it is featured heavily in cutscenes (some of which are original animations produced for the game) and on cover for the game. 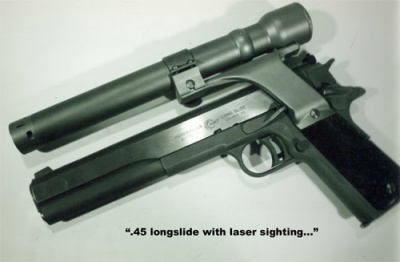 AMT Hardballer Longslide with laserlock sight as used in the film The Terminator - .45 ACP

The T-800 fires its AMT Hardballer in a cutscene.

A severly damaged T-800 with an AMT Hardballer. 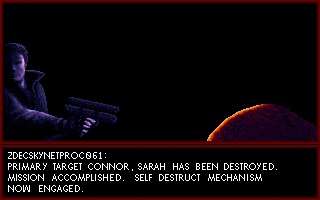 The T-800 after killing Sarah Connor, pistol in hand. This specific shot strangely depicts the Hardballer with its top extending past the back of the grip, though it could be interpreted as the gun's slide being locked back, but would also incorrectly imply that the laserlock sight is mounted on the AMT's slide rather than its left grip. 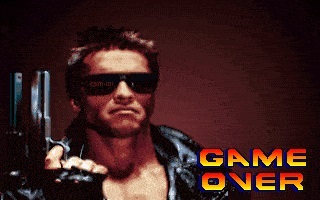 A "Game Over" screen, featuring the T-800 with an AMT Hardballer in its famous pose seen in covers for the movie.

Probably based on a Beretta 92F, a generic automatic handgun simply dubbed "Beretta" is a main automatic handgun in the game, which could be stolen or purchased in an assortment of weapon shops all over Los Angeles.

Beretta 92F (Early Model) - 9x19mm (Other side showing "92F" on slide) Other than the slim grip covers (the 92F is slightly different with a gloss black plastic, versus the 92FS) this pistol is difficult to tell apart from a 92FS. The only real proof is the year a movie was made and whether or not the 92FS existed yet. 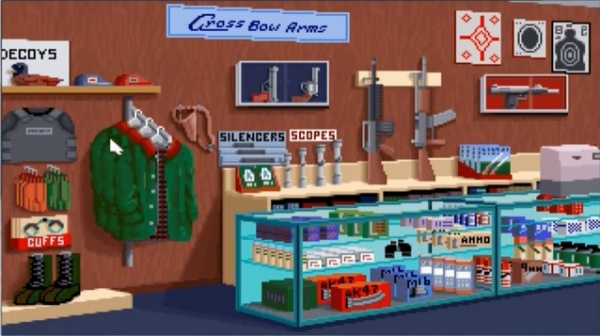 A "Beretta" is seen in a display case, next to the unidentified revolver. The Beretta appears to be fitted with wooden grips, though its HUD icon contradicts this by depicting it with black grips. Note the bottom shelf of the display counter, which apparently sells "AK47" and "M16" magazines, and ammunition presumably for the Beretta and/or Uzi is labelled as "9mm". 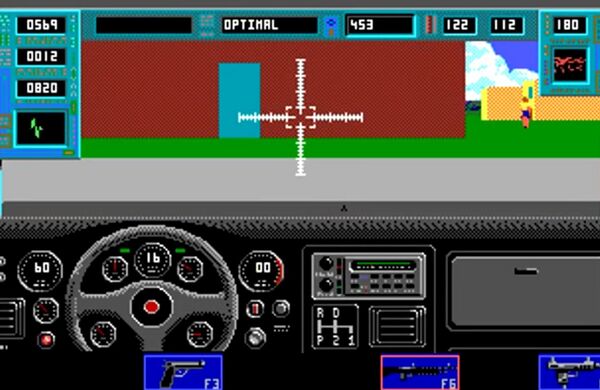 Readily available at the weapons shop is a rather generic revolver, which is a less detailed weapon in-game. It is most likely a stand-in for either the Smith & Wesson Model 15 or the Ruger Security Six, both of which Kyle Reese handled in the movie. The revolver slightly resembles the overall shape of a Single Action Army.

The "Revolver" is seen in the display case, next to the "Beretta". 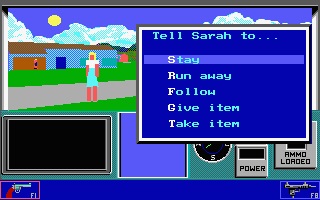 The revolver in possession of Kyle Reese, as seen in the game's HUD.

The only firearm from the movie which reappears in a playable portion of the game is an Uzi, under the name of "Uzi 9mm". 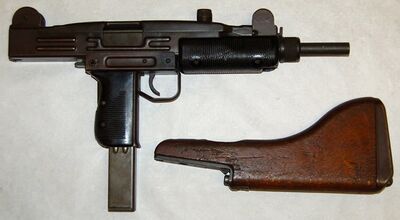 An Uzi is seen on the right in the weapon shop, inside a display case. Unlike its portrayal in the film, the Uzi has no folding stock attached.

An Uzi seen in possession of Kyle Reese. Its HUD icon also lacks a stock and more closely resembles the shape of a Mini Uzi.

A rather unrealistic choice for Los Angeles in both 1984 (the year in which the game is set) and 1990 (the year in which it was released), the AK-47 is seen readily available in the weapon shop and may be used in-game, although it looks more like the Galil SAR with wooden furniture. 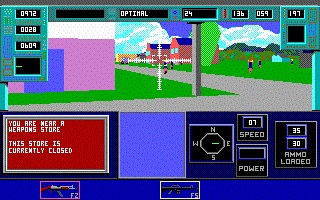 Also available is a simplified and still recognizable M16 rifle.

The M16 in the weapon shop. It appears to have a wooden stock and grip. Oddly, the bottom half of the handguard resembles that of an A2 model's.

An M16 in Kyle Reese's possession. The HUD icon contradicts the M16's weapon store sprite by including an all-synthetic set of furniture on the rifle. The handguard is seemingly shorter, like on carbine models.

An M60 without a bipod is a usable machine gun in the game. It can be stolen from a weapons cache in an army depot, which is apparently easy to break into and loot.

The General Dynamics RBS-80 used by the Infiltrator Terminator reappears on the main menu screen of the game. 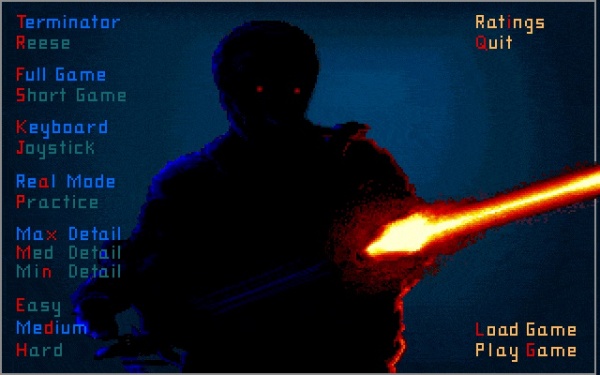