Sinners and Saints is a 2010 thriller starring Johnny Strong as Sean Riley, a detective with the NOPD, who while coping with a death of his son, is partnered with Will Ganz (Kevin Phillips), a young detective as together they try to solve series of murders in New Orleans. In the course of their investigation, the pair uncover a much bigger conspiracy. The cast includes Tom Berenger, Sean Patrick Flanery, and Jolene Blalock.

The following weapons were used in the film Sinners and Saints: 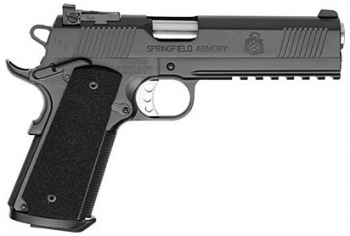 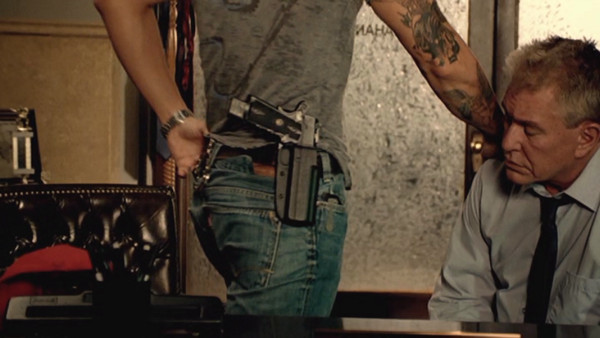 Sean firing his weapon during the shootout at Louis's house. 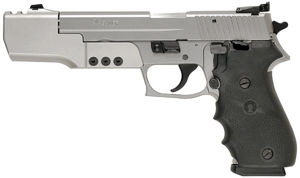 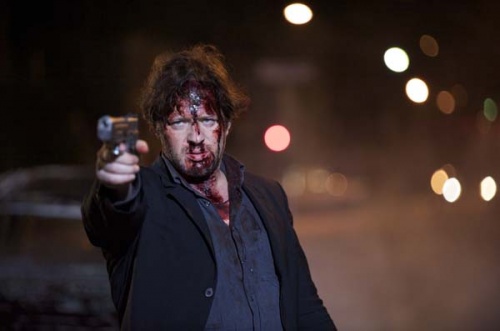 A Glock 17 is used by Detective Tom Wyatt (Holt Boggs) during the raid at the begining of the film.

Detective Will Ganz (Kevin Phillips) uses a Beretta Px4 Storm during the shootout at Louis's house.

Cole (Louis Mandylor) uses a Heckler & Koch USP in .45 ACP to trade fire with Riley and Ganz, and he later holds a woman hostage with it.

Cole (Louis Mandylor) firing his H&K USP during the shootout at Louis's house. 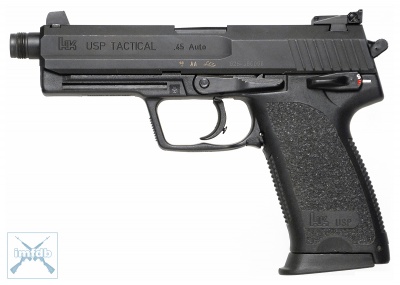 Detective Dave Besson (Kim Coates), Riley (Johnny Strong), and another NOPD officer, Franco (Mike Muñoz) use a Benelli M1 Super 90 during the house raid in the begining of the film. 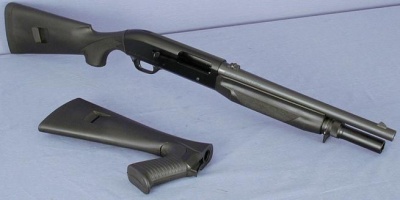 A gangster is seen using a sawed-off shotgun to fire at NOPD when they raid his home.

A mercenary uses a Mossberg 500 during the shootout at Colin's grandfathers house.

The mercenary firing his Mossberg 500 at Riley, Ganz, and Colin.

Another mercenary uses a Heckler & Koch MP5KA3 to fire at Riley's El Camino until being killed. 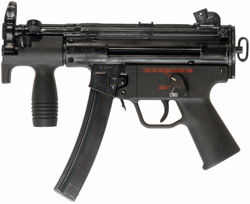 The mercenary firing his H&K MP5KA3 at Riley

A bald mercenary uses a Heckler & Koch MP5K-PDW during the shootout at Louis's house.

The bald mercenary fires his H&K MP5K-PDW at Riley

Cole (Louis Mandylor) uses a MP5K with a SEF plastic trigger pack and folding stock to hit the counterfeiting house. 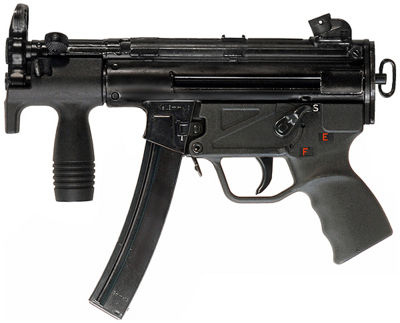 A Heckler & Koch UMP .45 is the weapon used by the mercenary Griff (Mark Hanson) throughout the film. He notably uses it during the shootout at Colin's (Sean Patrick Flanery) grandfathers house.

The Brügger & Thomet MP-9 is used by one of the mercenaries when they hit the counterfeiting house. It is fitted with a suppressor and a micro dot aim point sight. 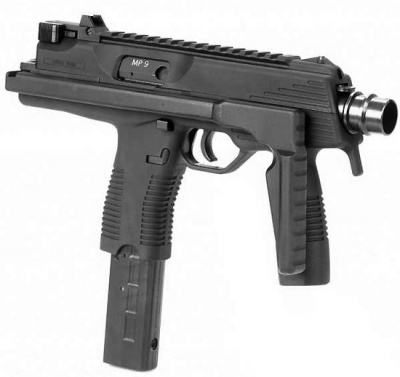 The Mercenary holds his MP-9 on the roof of the counterfeiting house.

The Mercenary firing a MP-9.

A MAC-10 is shown during the first interrogation scene. It is never seen again throughout the film. 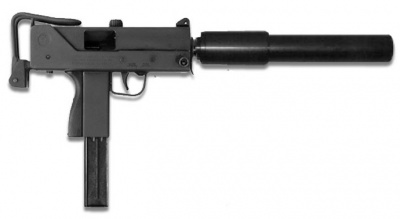 Detective Sean Riley (Johnny Strong) uses a M3A1 "Grease Gun" that Colin (Sean Patrick Flanery) had at his grandfather's house to trade fire with the mercenaries when they attack the house.

The M3A1 at Colin's grandfathers house prior to the firefight. Note the lack of the cocking lever

Detective Sean Riley fires the M3 at the Mercenaries.

Sean pulling the bolt of the M3A1.

When Detective Riley and his street crimes crew goes to raid a house, a gangster with a Smith & Wesson M76 fires on them.

The Gangster fires his Smith & Wesson M 76 at Riley

Riley (Johnny Strong) uses what is believed to be a Heckler & Koch HK416D dressed up to resemble William Kaufman's (the film's director) own personal Noveske 10.5. Riley uses this rifle to dispatch many of the mercenaries in their head quaters, located in "Ray's Boom Boom Room". Riley then tosses the rifle when he runs out of ammo. 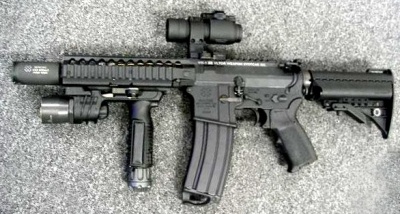 Sean firing a HK416D at the mercenaries.

Dekker (Bas Rutten) firing a DSA-SA58OSW at the Sean and Will Ganz.

mercenary armed with the M4A1.

Colin (Sean Patrick Flanery) fires an AKMS during the shootout at his grandfathers house. an AKMS is also used by the gangster "Remo" In the begining of the film during the raid.

Colin firing a AKMS at the mercenaries

"Remo" firing the AKMS at NOPD

Renko (Sonny Puzikas) caries a AKMSU with RIS handguard and Aimpoint T1 red dot sight during the shoot out at Sonny's house. Sean later takes the AKMSU to kill Cole.

A different bald mercenary uses a Steyr AUG-A1 during the shootout at Colin's grandfather's house.

The bald mercenary firing a Steyr AUG A-1
Retrieved from "https://www.imfdb.org/index.php?title=Sinners_and_Saints&oldid=1455988"
Categories: