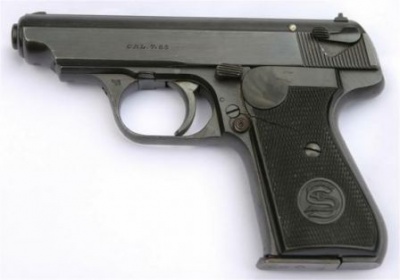 The Sauer 38H was a semi-automatic pocket pistol manufactured in Germany from 1938 to 1945 by J. P. Sauer & Sohn, the German half of what became SIG-Sauer. The "H" in "38H" stands for "Hahn", which is German for "hammer". It was the first pistol to feature a decocker, which was necessary due to the shrouded hammer. Simplified wartime models had more crude finish and lacked both the safety lever and the decocker, but some retained the safety and omitted the decocker.

The Sauer 38H and variants can be seen in the following films, television series, video games, and anime used by the following actors: